Local mate competition (LMC) theory has proved enormously successful in predicting sex ratios across a broad range of organisms when localised mating patches lead to mating competition amongst kin. As such, LMC is a key component of sex allocation theory. However, the mating systems that influence and promote LMC also shape other traits, as well as sex allocation. These aspects of LMC mating systems have received far less attention, including in species where LMC is common, such as parasitoid wasps. Here, we consider how LMC influences the evolution of insemination capacity in parasitoids, a key reproductive allocation decision for males that should be under both natural and sexual selection. Basic LMC theory predicts that a single female exploiting a patch should produce just enough sons to inseminate all her daughters, that is, between them these sons should have sufficient insemination capacity to inseminate their sisters. However, the insemination capacity of males is generally higher than predicted and, in order to classify parasitoid species, we propose an Index of Insemination Strategy (IIS): the ratio between the insemination capacity of males on the emergence patch and the average number of females available per male at emergence on that patch. A survey of IIS for 25 species belonging to 10 hymenopteran families showed that IIS values ranged from 0.9 to 40.9, supporting the idea that males typically have more sperm than predicted. Several factors could explain these high IIS values, including non-local mating, temporal variation in emergence, variation in mate acquisition capacity, the intensity of sperm competition, and responses to host quality. 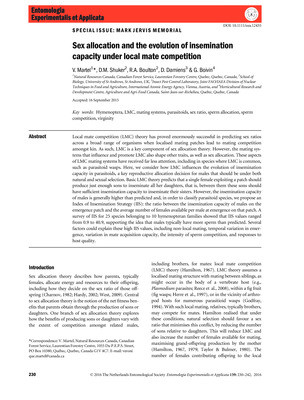