The objective is to designate a type specimen (the objective reality of a scientific species name) for a species of egg parasitoid introduced from Europe into North America to control Cereal Leaf Beetle. The species is redescribed properly from freshly reared material obtained at the type locality in Germany as well as material from several other European countries and North America. In addition, the extensive biological control literature on this species is summarized, and the species is compared with the apparently closest relatd eded species from Rice Leaf Beetle, a pest in Japan. Key findings and conclusion. We show that the two species are likely different but very close to each other. Scientific impact. By redescribing and illustrating both species and summarizing the literature biocontrol workers will better be able to recognize them and find all the relevant literature in a single place. 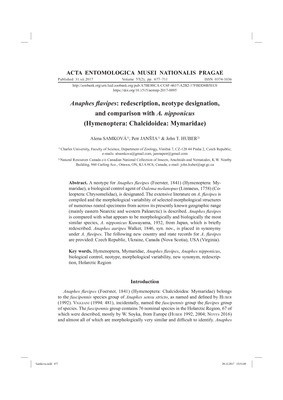