Background: Genomic selection (GS) uses information from genomic signatures consisting of thousands of genetic markers to predict complex traits. As such, GS represents a promising approach to accelerate tree breeding, which is especially relevant for the genetic improvement of boreal conifers characterized by long breeding cycles. In the present study, we tested GS in an advanced-breeding population of the boreal black spruce (Picea mariana [Mill.] BSP) for growth and wood quality traits, and concurrently examined factors affecting GS model accuracy.

Results: The study relied on 734 25-year-old trees belonging to 34 full-sib families derived from 27 parents and that were established on two contrasting sites. Genomic profiles were obtained from 4993 Single Nucleotide Polymorphisms (SNPs) representative of as many gene loci distributed among the 12 linkage groups common to spruce. GS models were obtained for four growth and wood traits. Validation using independent sets of trees showed that GS model accuracy was high, related to trait heritability and equivalent to that of conventional pedigree-based models. In forward selection, gains per unit of time were three times higher with the GS approach than with conventional selection. In addition, models were also accurate across sites, indicating little genotype-by-environment interaction in the area investigated. Using information from half-sibs instead of full-sibs led to a significant reduction in model accuracy, indicating that the inclusion of relatedness in the model contributed to its higher accuracies. About 500 to 1000 markers were sufficient to obtain GS model accuracy almost equivalent to that obtained with all markers, whether they were well spread across the genome or from a single linkage group, further confirming the implication of relatedness and potential long-range linkage disequilibrium (LD) in the high accuracy estimates obtained. Only slightly higher model accuracy was obtained when using marker subsets that were identified to carry large effects, indicating a minor role for short-range LD in this population.

Conclusions: This study supports the integration of GS models in advanced-generation tree breeding programs, given that high genomic prediction accuracy was obtained with a relatively small number of markers due to high relatedness and family structure in the population. In boreal spruce breeding programs and similar ones with long breeding cycles, much larger gain per unit of time can be obtained from genomic selection at an early age than by the conventional approach. GS thus appears highly profitable, especially in the context of forward selection in species which are amenable to mass vegetative propagation of selected stock, such as spruces.

In this study, the researchers showed that genomic selection could be used in black spruce improvement programs in order to predict trees’ characteristics. This method would help reduce the costs of genetic improvement. Genomic selection uses information from thousands of genetic markers in order to predict trees’ traits. This approach could speed up plant production by improving growth and quality for reforestation. 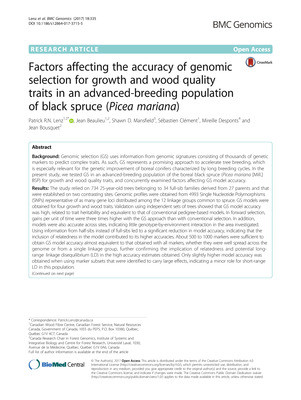