Although wildland fires are a beneficial ecosystem process, they can also cause destruction to human-built structures and infrastructure, as evidenced by disasters such as the Fort McMurray fire in 2016 and the Slave Lake fires in 2011. This type of destruction occurs in the “wildland-urban interface” (WUI), which are areas where homes or other burnable community structures meet with or are interspersed within wildland fuels. In order to mitigate destructive WUI fires, basic information such as the location of these areas is required. Unfortunately, Canada does not have a national scale, high-resolution WUI map for use in research or fire management, which hinders our ability to study and manage/mitigate fires in WUI areas. Therefore, this study focused on defining and mapping the WUI for the national area of Canada. Two additional national maps were produced: a “wildland-industrial interface” (WII) map (i.e. the interface of wildland fuels and industrial structures) and an “infrastructure interface” map (i.e. the interface of wildland fuels and infrastructure such as roads and railways). Industrial structures and infrastructure are not traditionally defined as part of the WUI, but may require protection from fires and are important emerging issues which have not been delineated previously (within Canada or otherwise). All three interface types (WUI, WII, and infrastructure interface) were defined as areas of wildland fuels which are within a variable-width buffer (maximum distance: 2400 m) from potentially vulnerable structures or infrastructure. Nationally, it was found that Canada has 32.3 million ha of WUI (3.8% of total national land area), 10.5 million ha of WII (1.2%), and 109.8 million ha of infrastructure interface (13.0%). The results of this study provide a baseline for future research, including fire risk mapping, change detection, and future predictions of interface areas. There are also a wide variety of practical applications, including various topics in wildfire mitigation (e.g. FireSmart and industrial fire regulations), long-term planning (e.g. city planning and insurance), and wildfire decision support (e.g. fire prioritization and risk modelling). 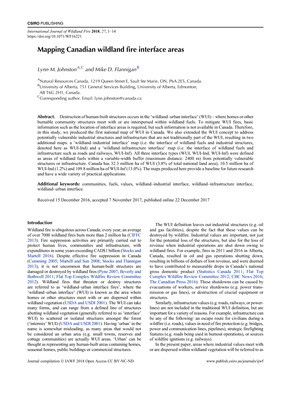