Cost-effective, ecologically relevant, sensitive, and standardized indicators are requisites of biomonitoring. In this paper, we describe the first application of DNA metabarcoding techniques to stream macroinvertebrate communities in Canadian forests as a potentially transformative, integrative and directly relevant indicator of ecological integrity at the critical terrestrial-aquatic interface of forest ecosystems. The study demonstrates the practicality of the approach and the information-rich, high resolution taxonomic data resultant therefrom which reflect differences in the multivariate character of forested watersheds under extensive management. The study results show strong congruence in community metrics determined based on DNA metabarcoding as compared to classical identification techniques. Metrics such as taxa richness, and percent composition of sensitive macroinvertebrate groups such as Ephemeroptera, Plecoptera and Trichoptera, together with the typically insensitive group (Chironomidae) were strongly related to the major differentials among the 23 forested watershed examined. In this study, we exploited enhanced forest inventory information available across the Hearst sustainable forest licence, to provide detailed characterization of forest composition, structure and topography as well as accurate delineation of drainage areas of each study watershed. Results demonstrate that observed differentials in stream macroinvertebrate communities are linked to watershed size, slope and forest composition at the watershed level. The linkages between macroinvertebrate communities and watershed character are mediated through differences in stream chemistry including dissolved oxygen, and dissolved organic carbon, total nitrogen and conductivity. Our study demonstrates the usefulness and sensitivity of macroinvertebrate DNA metabarcoding as an advanced technique which can be effectively integrated with enhanced forest inventory data to allow for detailed quantitative monitoring and understanding of relationships between forest watershed condition and ecological integrity of primary drainage streams. Further studies focused on applying more refined sampling techniques and assessments across a gradient of forest disturbance in a more intensively managed forest of the Acadian region have also been completed and will be the subject of future publications. 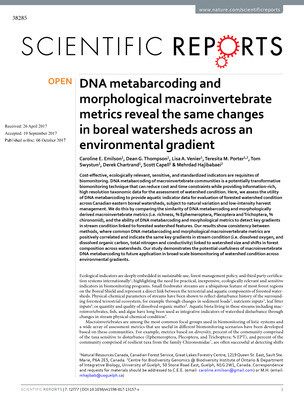