Aim: Biotic disturbances (BD, including insects, pathogens and wildlife herbivory) can alter forest structure and the capability of forests to deliver ecosystem services. Impact assessments, however, are limited by the lack of reliable and timely disturbance data at large spatial scales. This review synthesizes empirical data on the magnitude and distribution of spatio-temporal impacts of BD.

Methods: Based on large-scale, multi-year BD data sets, covering c. 46% of the global forest, we calculated annual disturbance fractions Df (percentage of forest area affected) and their inter-annual variability at a grid cell resolution of 1°. The impact of BD on forest carbon pools was determined by overlaying Df with data on forest cover and carbon density.

Results: Overall, 43.9 million hectares (Mha) (Df =2.6%) of forests were affected annually by BD, particularly by insects (36.5 Mha, Df =2.2%). Our synthesis demonstrates that fractions affected by BD (1) vary greatly over space and time, mainly in response to ephemeral bark beetle and defoliator outbreaks, (2) show temporal trends that are inconsistent across regions, yet are largely increasing over recent decades, and (3) are substantially higher than Df caused by fire and other abiotic disturbances. Tree mortality was estimated over an area of 3.3 Mha year -1 (medium estimate which assumed mortality at 7.5% of the affected area), with associated committed carbon fluxes from living biomass to litter and the atmosphere at 129.9 Mt C year-1 .

Main conclusions: BD are key drivers of forest dynamics, making a contribution to tree mortality of a similar magnitude to fire. Despite inherent uncertainties, the data reported can be used to improve the representation of BD in global ecosystem models. Our findings call for future forest monitoring approaches to provide accessible, precise and consistent data on the occurrence and severity of BD which are harmonized across jurisdictions.

Events that disrupt the ecosystem and are caused by living organisms (“biotic disturbances”) — largely insects — are expected to occur more often and become more severe as a result of climate change. To determine trends and measure the impacts of these disturbances, we need to be able to monitor and report on them annually. Globally, what is the area damaged by insects across boreal and temperate forests of the northern hemisphere? Recent disturbance information over many years was collected from 40 countries in North America, Europe, and Central-east Asia, representing almost half of global forest cover. Approximately 3% of northern forests over a total area of 43.5 million hectares are affected annually by insects. The countries with the highest disturbed area included Canada, China and European countries. A major limitation in these figures was the variation in data-collection methods and reporting requirements, resulting in data with considerable uncertainty. Given the important role of insect disturbance on forest growth and development, we recommend greater efforts to improve precision and consistency in future data-collection programs. 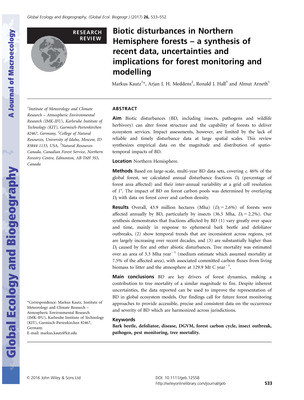