Two genera, Apimela Mulsant & Rey and Gyronycha Casey (both Aleocharinae: Oxypodini: Meoticina), are recorded from New Brunswick and Canada for the first time. The following species are newly recorded or described as new in New Brunswick and Canada: Apimela fusciceps (Casey); A. Canadensis Klimaszewski & Webster, sp. n.; and Gyronycha pseudoobscura Klimaszewski & Webster, sp. n. The genera are defined and the key for species identification is provided. Color habitus images and black and white images of the median lobe of the aedeagus, spermatheca, tergite, and sternite VIII are provided for all species occurring in Canada, and Apimela macella (Erichson), the type species of genus Apimela, and G. valens Casey, the type species of Gyronycha. New or additional habitat data are provided for the species treated in this contribution. The following new synonym is established: Gyronycha lepida Casey, 1911 (NC), is a synonym of G. fusciceps Casey, 1894 (NC).

In this article, the researchers report the presence of the genera Apimela and Gyronycha for the first time in New Brunswick.

The research focused on six insect species in these families. Among them, three were identified for the first time in Canada, two of which had never been described previously. The article also includes an identification key, photos, and habitat data.

Taxonomy is a science that classifies living organisms. It is used in biodiversity studies or in studies assessing the impact of human activities on forest ecosystems, among other things. 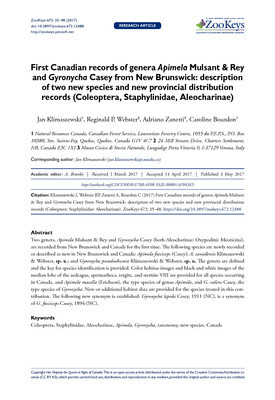