The Staphylinidae, or rove beetles, is one of the largest and most biologically diverse of the beetle families. The world fauna consists of more than 63,495 described species, with more than 1774 species recorded in Canada. By virtue of their sheer abundance, number of species and trophic diversity, rove beetles play important roles in terrestrial ecosystems. These beetles also have great potential for use as indicators of forest change because of their affinity for specific habitats and microhabitats and their sensitivity to habitat change. With continued advances in identification tools such as taxonomic keys with high-resolution photos, rove beetles have been increasingly incorporated into biodiversity research projects, thus increasing both the scope and inferences drawn from these studies. In this chapter, we highlight recent biodiversity studies using rove beetles and discuss how these beetles have added to our perspectives on changing forest and agroecosystems. In forest ecosystems, rove beetle assemblages are affected by both large- and small-scale natural disturbances, forest succession and silviculture. Thus far in boreal ecosystems, responses of rove beetles have been evaluated primarily in terms of their responses to stand-replacing wildfire and clearcut harvesting. However, given the apparent affinity of rove beetles for microhabitats, increasing attention has been focused on smaller-scale disturbances and silvicultural interventions that may leave residual standing trees, create small gaps and/or modify soils or deadwood.

Rove beetles also are important biological control agents against pest populations. In Canadian agroecosystems, rove beetles have mostly been used in conservation biological control as a diverse assemblage of generalist predators or in more focused applications. We provide a review of the research conducted in Canadian agroecosystems and describe general patterns of the communities across a variety of crop types and compare these with other agricultural systems on a global scale. While the temporal and spatial dynamics of rove beetle assemblages and the responses of their populations to different cultural practices are becoming better known, direct predator-prey interactions and subsequent impacts on pest populations remain poorly understood. Biological control of several dipteran pests by rove beetle parasitoids in the genus Aleochara remains one of the best-studied systems, likely due to the high specificity of Aleochara for dipteran hosts. Several general recommendations are provided for future research to better quantify and predict control by rove beetles.

In this chapter, the researchers present a picture of rove beetles. These insects play an important role in the terrestrial ecosystem. The chapter looks at recent studies that use these insects as biodiversity indicators following forest interventions. The authors also describe them as playing an important role as biological control agents in agriculture. Rove beetles are insects that belong to the order Coleoptera.

Taxonomy is the science of classifying living organisms. Insects are grouped into different orders, which are then subdivided into families, genera, and species. Taxonomy is used in biodiversity studies or assessments of the impacts of human activities on forest ecosystems, among other things. 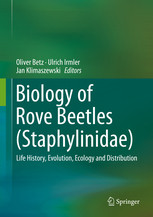