The comprehensive analysis of carbon stocks and fluxes of managed European forests is a prerequisite to quantify their role in biomass production and climate change mitigation. We applied the Carbon Budget Model (CBM) to 26 European countries, parameterized with country information on the historical forest age structure, management practices, harvest regimes and the main natural disturbances. We modeled the C stocks for the five forest pools plus harvested wood products (HWPs) and the fluxes among these pools from 2000 to 2030. The aim is to quantify, using a consistent modeling framework for all 26 countries, the main C fluxes as affected by land-use changes, natural disturbances and forest management and to assess the impact of specific harvest and afforestation scenarios after 2012 on the mitigation potential of the EU forest sector. Substitution effects and the possible impacts of climate are not included in this analysis.

Results show that for the historical period from 2000 to 2012 the net primary productivity (NPP) of the forest pools at the EU level is on average equal to 639 Tg C yr–1. The losses are dominated by heterotrophic respiration (409 Tg C yr–1) and removals (110 Tg C yr–1), with direct fire emissions being only 1 Tg Cyr –1, leading to a net carbon stock change (i.e., sink) of 110 Tg C yr –1. Fellings also transferred 28 TgC yr –1 of harvest residues from biomass to dead organic matter pools. The average annual net sector exchange (NSE) of the forest system, i.e., the carbon stock changes in the forest pools including HWP, equals a sink of 122 Tg C yr –1 (i.e., about 19% of the NPP) for the historical period, and in 2030 it reaches 126, 101 and 151 Tg C yr–1, assuming constant, increasing (+20 %) and decreasing (–20 %) scenarios, respectively, of both harvest and afforestation rates compared to the historical period. Under the constant harvest rate scenario, our findings show an incipient aging process of the forests existing in 1990: although NPP increases (+7 %), heterotrophic respiration increases at a greater rate (+13 %) and this leads to a decrease in the sink in the forest pools (–6 %) in 2030 compared to the historical period.

By comparing the evolution of the biomass as a function of the NPP (i.e., the turnover time) for each country, we highlighted at least three groups of countries and turnover times. This means that, contrary to the assumptions proposed by other authors, this relationship cannot be assumed as a constant for all the EU countries, but specific conditions, such as the harvest rate, the current age structure and the forest composition, may contribute to the country-specific evolution of biomass stocks.

The detailed picture of the C fluxes condensed in this study, and their evolution under different harvest scenarios, may represent both a benchmark for similar studies and a basis for broader analyses (e.g., including substitution effects of wood) on the mitigation potential of the EU forest sector.

This is the fifth paper from the ongoing research collaboration between the Canadian Forest Service and the Joint Research Centre of the European Union. In this study we applied the Carbon Budget Model of the Canadian Forest Sector (CBM-CFS3), using the forest inventory data and other information from 26 European countries to estimate the C stocks and fluxes for five forest ecosystems and harvested wood products (HWPs) from 2000 to 2030. Using a consistent methodological approach we estimated the C fluxes as affected by land-use changes, natural disturbances and forest management and we assessed the impact of harvest and afforestation scenarios on the climate change mitigation potential of the EU forest sector. The results of the study show how changes in land use (afforestation), harvest rates and wood uses affect carbon balances in Europe’s forest sector. The study also revealed how increases in forest age contribute to reductions Europe’s forest carbon sink. The collaborative research between the EU and CFS is continuing. 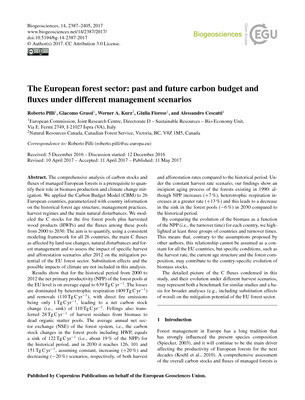