Since the mountain pine beetle (MPB) breached the Rocky Mountains and first appeared in the province of Alberta, Canada, in alarming numbers in the summer of 2005, it has spread eastward across Alberta at an average rate of 80 km/year. In the absence of aggressive control, the beetle will undoubtedly continue to spread eastward. The spread rate is expected to slow as the leading edge invasion front moves further from significant population sources in the dense pine of the Rocky Mountain foothills into the scattered pine of the boreal plains region. However, the realized rate of spread is uncertain, as it will be regulated by a number of factors, some of which are uncertain (e.g. how an insect behaves in a novel environment), inherently unpredictable (e.g. weather), or under human control (e.g. spread control efforts). Whereas previous studies have examined factors affecting spread individually, we present a synthetic framework that models future spread rates as a function of coupled nonlinear recruitment dynamics that arise from the distinct population phases of MPB, and correlated thermal response functions that are characteristic of the influence of climate and climate change on ecosystem processes. We analyzed the model’s behavior under two climatic driving scenarios (drying climate and warming climate) and one forest health scenario (an increase in the ratio of stressed to vigorous trees), with the hypothesis that these scenarios would produce unanticipated outcomes in the severity and timing of beetle outbreaks. Our results showed a classic ‘‘tipping-point” model capable of generating sudden, unanticipated behavior, demonstrating that MPB populations may respond very strongly to small changes in climate. The MPB may be the first of many systems to behave in unprecedented ways. The model makes clear that the eastward rate of spread will depend on whether, when, and where the system transitions from the current epidemic state to a new endemic state. However, major uncertainties in the system limit our ability to make robust predictions of spread under natural conditions. The integrating framework presented here provides insight into scientific uncertainties worth targeting for applied research into spread management. In the absence of ability to predict beetle spread, forest management should continue to explore ways of coping with unpredictable disturbances, including adaptive capacity to adjust to transformational ecosystem changes expected under climate change.

Over the period 2006–2011 the mountain pine beetle spread eastward across Alberta at an average rate of 80 km/year. This spread rate is expected to slow as the invasion front moves from population sources in the dense pine of the Rocky Mountains into scattered pine of the cooler boreal plains region. This study aimed to understand the dynamics of beetle populations by constructing a complex mathematic model that takes into account the many factors affecting beetle population growth. The model shows that small increases in climate warming, drying, or the ratio of unhealthy to healthy pines can result in large effects on beetle populations. In fact, the combination of these factors can lead to a “tipping point” at which beetle populations become epidemic and spread quickly. Such a combination of factors probably started the unprecedented beetle range expansion in BC in the late 1990s. These factors will also affect how quickly the beetles spread eastward, where they may one day threaten the commercially valuable eastern white pine forests of Ontario. However, expanding into cooler areas of healthy trees could just as unpredictably slow or stop the epidemic. The beetles would become “endemic” – remaining within their current range at a low level. Unfortunately, the model cannot predict whether, when, or where the beetles might become endemic rather than epidemic, as there is too much uncertainty about many of the factors. The authors conclude that torest management should explore ways of coping with unpredictable disturbances, including the development of adaptive capacity to adjust to ecosystem changes. 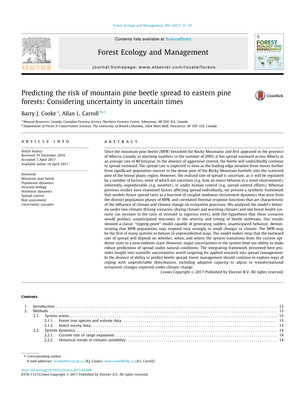