The use of Hypocreales fungi against bark beetles is an attractive alternative strategy for biological control in forestry. However, fungal inoculation methods remain a major challenge due to the cryptic behaviour of these beetles. Experiments were conducted to evaluate the susceptibility of adult eastern larch beetles, Dendroctonus simplex, to different isolates of Hypocreales fungi and to assess the efficiency of direct inoculation of fungal conidia using an assisted autodissemination device. Among the nine fungal isolates tested, Beauveria bassiana INRS-242 was selected as the utmost isolate causing a mortality rate of 64.4% of D. simplex adults within 10 days and having a high conidial viability of 81.7%. Using an assisted autodissemination device, a fungal-coated pouch was a promising contamination chamber. Once it had fallen onto the fungal-coated pouch, each D. simplex adult loaded an average lethal dose of 2.1 x 109 conidia, which induced a mortality rate of 98.0%. Our results demonstrated the fungal pathogenicity of B. bassiana INRS-242 against the eastern larch beetles and pointed out the potential of the assisted autodissemination device as an effective method of conidia inoculation. These findings represent the first step to develop a biological control strategy against D. simplex populations. 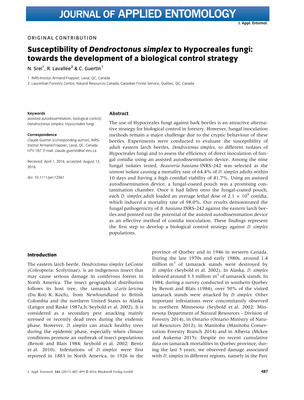