The use of introduced biological control agents is one method being explored to help reduce the spread and growth of emerald ash borer (EAB) populations. Two species of parasitic wasps (parasitoids) from the native range of EAB (Asia) are currently being evaluated in Canada. Parasitoid release in test plots began in Canada in 2013, in an attempt to establish populations of the wasps (Tetrastichus planipennisi) in the region infested with EAB. In 2015, tests began with a second species, Oobius agrili, an egg parasitoid. Early establishment of T. planipennisi appears to be quite high, with wasps recovered at all six sites. It is too early yet to conduct recovery sampling for the egg parasitoid, O. agrili; this sampling will commence in 2017. A rearing initiative has been started with the Insect Production and Quarantine Laboratory at the Great Lakes Forestry Centre in collaboration with the USDA-APHIS rearing facility in Brighton, Michigan. Further research is necessary to continue to evaluate initial and permanent establishment of one or both parasitoids. In addition, releases of one or more additional parasitoid species will be conducted as permission is obtained to import them into Canada. It is still very early in the development of the biological control program for EAB in Canada; no results on any potential impact of the parasitoids on EAB populations are yet available, but this will be evaluated in the future. Preliminary studies in the US demonstrate increasing parasitism levels over time and some reduction in the rate of growth of EAB populations. In the long term, establishment of these parasitoids is intended to assist in regulating EAB at lower population levels. 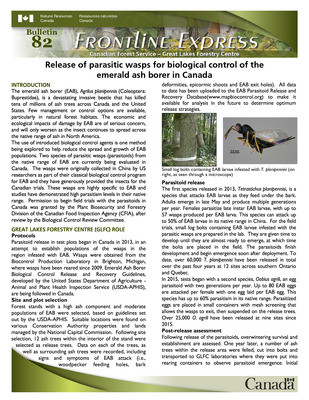