Earth surface systems are controlled by a combination of global and local factors, which cannot be understood without accounting for both the local and global components. The system dynamics cannot be recovered from the global or local controls alone. Ground forest inventory is able to accurately estimate forest carbon stocks in sample plots, but these sample plots are too sparse to support the spatial simulation of carbon stocks with required accuracy. Satellite observation is an important source of global information for the simulation of carbon stocks. Satellite remote sensing can supply spatially continuous information about the surface of forest carbon stocks, which is impossible from ground-based investigations, but their description has considerable uncertainty. In this paper, we validated the Kriging method for spatial interpolation of ground sample plots and a satellite observation-based approach as well as an approach for fusing the ground sample plots with satellite observations. The validation results indicated that the data fusion approach reduced the uncertainty of estimating carbon stocks. The data fusion had the lowest uncertainty by using an existing method for high-accuracy surface modelling to fuse the ground sample plots with the satellite observations (HASM-S). The estimates produced with HASM-S were 26.1 and 28.4% more accurate than the satellite-based approach and spatial interpolation of the sample plots respectively. Forest carbon stocks of 7.08 Pg were estimated for China during the period from 2004 to 2008, an increase of 2.24 Pg from 1984 to 2008, using the preferred HASM-S method.

In this article, the researchers validated the Kriging interpolation method. Used to assess carbon stocks, this method makes it possible to combine field inventory results with satellite observations. This method reduces uncertainty with regard to the assessment of carbon stocks.

The researchers applied this method to the territory of China and estimated that carbon stocks were around 7 petatons for the 2004-2008 period, which represents an increase of 2 petatons compared with the results for the 1984-2008 period. 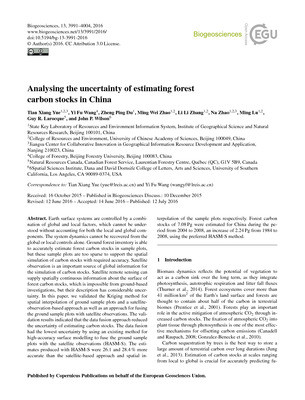