Climate change is expected to result in substantial ecological impacts across the globe. These impacts are uncertain but there is strong consensus that they will almost certainly affect fire regimes and vegetation. In this study, we evaluated how climate change may influence fire frequency, fire severity, and broad classes of vegetation in mountainous ecoregions of the contiguous western US for early, middle, and late 21st century (2025, 2055, and 2085, respectively). To do so, we employed the concept of a climate analog, whereby specific locations with the best climatic match between one time period and a different time period are identified. For each location (i.e. 1-km2 pixel), we evaluated potential changes by comparing the reference period fire regime and vegetation to that of the fire regime and vegetation of the nearest pixels representative of its future climate. For the mountainous regions we investigated, we found no universal increase or decrease in fire frequency or severity. Instead, potential changes depend on the bioclimatic domain. Specifically, wet and cold regions (i.e. mesic and cold forest) generally exhibited increased fire frequency but decreased fire severity, whereas drier, moisture-limited regions (i.e. shrubland/grassland) displayed the opposite trend. Results also indicate the potential for substantial changes in the amount and distribution of some vegetation types, highlighting important interactions and feedbacks among climate, fire, and vegetation. Our findings also shed light on a potential threshold or tipping point at intermediate moisture conditions that suggest shifts in vegetation from forest to shrubland/grassland are possible as the climate becomes warmer and drier. However, our study assumes that fire and vegetation are in a state of equilibrium with climate, and, consequently, natural and human-induced disequilibrium dynamics should be considered when interpreting our findings.

To understand how climate change will affect wildfires in future – both how often fires occur and how severe they are – this study looked at wildfires in mountainous regions in the western US in the past and predicted fire risk in 2025, 2055 and 2085. Specifically, the researchers looked at climate in the last 30 years and found the nearest areas where a similar climate will be found later in the 21st century. These are called “climate analogs.” This approach helps determine the time between fires and the severity of fires in such areas in the future. The researchers also looked at changes in vegetation (trees, grasses, etc.) in the same way. The study found that some wet areas will have less frequent and less severe fires, while drier areas will have fires more often, and more severe fires. Vegetation in the climate analogs may be quite different from vegetation in the past. In fact, some dry forests may no longer be forests but change to shrubland or grassland. This means that hotter, drier weather may not necessarily mean more wildfires if vegetation changes. These conclusions differ from those of earlier studies, which found that fires would increase over most of the western US in response to climate change. 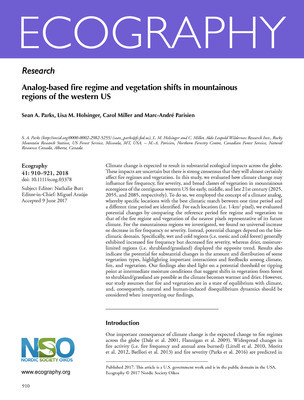