The extent to which past states influence present and future ecosystem characteristics (ecosystem memory (EM)) is challenging to assess because signals of past ecological conditions fade with time. Using data about seven different taxa, we show that ecological gradients initiated by wildfires up to three centuries earlier affect biotic recovery after variable retention harvest in the boreal mixedwood forest. First, we show that fire history over the last 300 years is reflected in pre-harvest species-specific stand basal area (BA), with longer times since high severity fire associated with proportionally higher BA of shade-tolerant softwood species than shade-intolerant hardwoods. Second, using patterns in the BA of pre-harvest tree species we link fire history to species composition of pre-harvest assemblages of bryophytes, herbs, shrubs, regenerated trees, songbirds, spiders and carabid beetles. Finally, we use variance partitioning to compare the importance of species-specific pre- versus post-harvest BA for explaining the structure of these seven biotic assemblages two, five and ten years after harvest. We detected persistent significant effects of pre-harvest BA in all post-harvest biotic assemblages up to ten years after harvest. Pre-harvest BA was more strongly associated with early post-harvest understory plant and carabid beetle assemblages than was post-harvest BA, but the opposite was true for spiders, songbirds and regenerated trees. EM effects were detected two, five and ten years after harvest but temporal patterns varied according to taxa. Thus, EM of fire history can persist at least ten years after variable retention harvest and such effects appear to be stronger for understory plants than for animals. We conclude that management of biological legacies to increase post-disturbance EM will increase overall resilience and sustainability of these mixedwood forests.

Ecosystem memory refers to the extent to which the past affects the way an ecosystem functions now and how it will function in the future. In this study, we investigated the influence of past fire history on the mixedwood boreal forest in northwestern Alberta. We collected data on shrubs, herbs, bryophytes (e.g., mosses), regenerated trees, ground beetles, spiders, and songbirds from plots of land at the EMEND research site. We found that the composition of tree species in a given plot strongly reflected the fire history of that plot over the last 300 years. Our results also showed that a plot’s ecological memory of wildfire influenced the recovery of its animal and plant life two, five, and 10 years after the plot was harvested. This effect was stronger for understory plants than for animals. The projected speed and extent of global environmental change may compromise our sustainable use of many ecosystems, especially in the face of cumulative effects of human-caused and natural disturbances. We argue that working with the biological legacies created by historical disturbances and actively managing these legacies to sustain ecosystem memory after human-caused disturbances will improve the resilience of biodiversity. 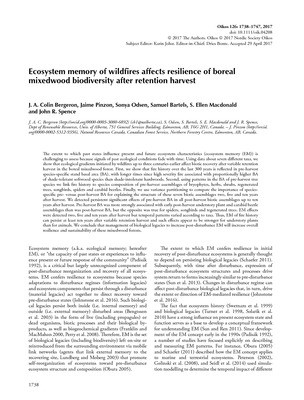