Since 2001, climatic conditions have been notably drier than normal across large areas of the western Canadian interior, leading to widespread impacts on the forests of this region. This poses a major concern for the future, given climate change projections for continued warming and drying. We conducted tree-ring analysis in 75 pure stands of white spruce (Picea glauca) across Alberta and west-central Saskatchewan to examine the effects of recent climatic drying on the growth of this important boreal tree species. Allometric equations were used to calculate annual growth in aboveground tree biomass (GBM) from ring width measurements. Results showed an increasing trend in GBM from the 1960s to the 1990s, followed by a sharp decline during the severe drought of 2001–2002. Of the 75 stands, only 18 recovered sufficiently to cause an increase in mean GBM from the pre-drought decade of 1991–2000 to the subsequent decade of 2001–2010. The remaining 57 stands exhibited a decline in mean GBM between these decades. Climatic drying was a major cause of the growth decline, as shown by the significant stand-level relationship between percentage change in decadal mean GBM and the change in decadal mean values of a climate moisture index from 1991–2000 to 2001–2010. Subsequent analyses of boreal stands sampled across Alberta during 2015 revealed that white spruce growth had declined even further as drought conditions intensified during 2014–2015. Overall, there was a 38% decrease in mean GBM between 1997 and 2015, but surprisingly, the percentage decrease was not significantly different for young, productive stands compared with older, less productive stands. Thus, stand ageing cannot explain the observed decline in white spruce growth during the past quarter century, suggesting that these forests are at risk if the trend toward more frequent, severe drought continues in the region.

In our research, we are studying how drought affects the growth of white spruce, an important commercial tree species in western Canada. As part of a CFS-led project with the Alberta forest health group, we collected increment cores for tree-ring analysis from 75 locations across Alberta and western Saskatchewan. From the tree ring measurements, we calculated the yearly growth of biomass in each white spruce tree over its lifetime (total of 400 trees). We found that over the past 15 years, average white spruce growth has declined by 16% since the 1990s. We showed that this growth decline was caused by the unusually dry conditions that persisted across the region during 2001‒2015. Surprisingly, we found that the rate of growth decline in younger white spruce stands (40‒100 years old) was the same as in older white spruce stands (over 100 years old). These results show that it is important to consider the effects of drought when making predictions of growth and yield of white spruce for forest management planning in this region. 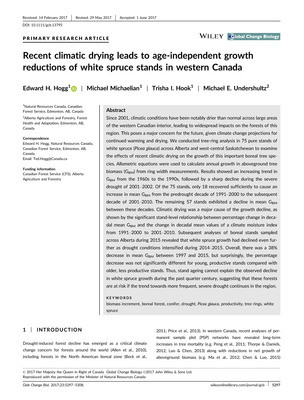