Seismic explorations are used to locate and determine the depth of oil deposits before their extraction. Seismic lines created during seismic explorations are among the most common linear disturbances found in Alberta and thus one of the main causes of forest fragmentation, which poses a serious threat to diversity in the landscape. Historically, seismic line construction involved wood clearing of 5- to 10-m-wide strips (often many kilometers in length) using heavy machinery. Recently, low impact seismic (LIS) techniques have been developed and implemented to reduce the environmental footprint of oil industry explorations. The extent of ecological effects of these linear disturbances, however, is little known. We looked at how far into the forest the effect of these lines (the edge effect) reached and how it affected the diversity and abundance of plants. We also assessed whether the orientation of these lines influenced plants and environmental factors. Edge orientation had no effect on extent of edge effects on plants or environmental variables, but distance from line centre and line edge did. Diversity and abundance of herbs were reduced on the lines and near the edges and was detectable as far as 75 m away from the line and into the adjacent forest. Reduced light reaching the ground near the line edges, caused likely by denser tree canopies near the edges, probably contributed to reduced presence of low-to-the-ground herbs. Diversity and abundance of mosses and lichens was also reduced, but only on the lines and at the edges. Natural regeneration of the lines is less likely to occur if the main sources for that regeneration (seeds, means for vegetative reproduction) were reduced in the areas near line edges and disturbances. We recommend long-term and regular monitoring of LIS lines, as active management and remedial reclamation actions may be required to promote the recovery of these disturbances. 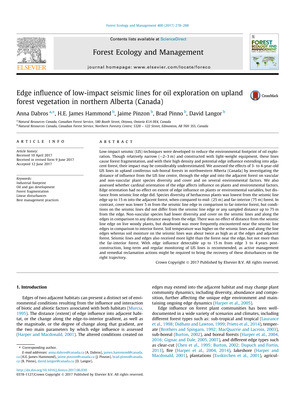