Phenological changes are expected with the ongoing global warming, which could create mismatches in the growth patterns among sympatric species or create synchrony with insect herbivores. In this study, we performed a comparative assessment of the timings of bud break among seven conifer species of Eastern Canada by evaluating seedling development in growth chambers under different temperatures (16, 20 and 24 °C). Bud break occurred earliest in Larix laricina, while Pinus strobus and Pinus resinosa had the latest. Warmer conditions advanced bud break, with the greatest effects being observed at the lower temperatures. Mixed models estimated that one additional degree of temperature produced advancements of 5.3 and 2.1 days at 16 and 20 °C, respectively. The hypothesis of an asynchronous change between species under warming was demonstrated only for the last phenological phases (split buds and exposed shoots), and principally in pines. Abies balsamea showed changes in bud break comparable with the other species analysed, rejecting the hypothesis of mismatches under warmer conditions. The observed non-linear responses of the timings of bud break to warming suggest that the major changes in bud phenology should be expected at the lowest temperatures.

In this study conducted in the laboratory, the researchers measured the impact of various temperatures on bud break in seven conifer species of eastern Canada. For any given temperature, the buds of tamarack were the earliest to open, whereas the phenomenon occurred later in white pine and red pine.

In all species studied, bud break came earlier when temperatures were higher, and this effect was more pronounced at lower temperatures. Indeed, the researchers estimate that adding one degree at 16°C and 20°C accelerated bud break by 5 and 2 days, respectively.

Therefore, climate change would bring about changes in the development of the species under study, which could affect their synchrony with predators and pests. 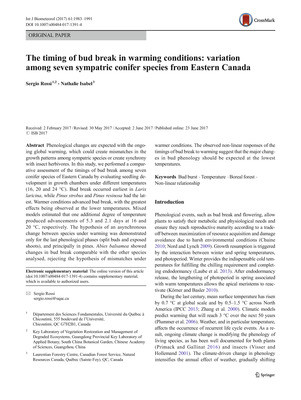