Climate change is likely to affect windthrow risks at northern latitudes by potentially changing high wind probabilities and soil frost duration. Here, we evaluated the effect of climate change on windthrow risk in eastern Canada’s balsam fir (Abies balsamea [L.] Mill.) forests using a methodology that accounted for changes in both wind speed and soil frost duration. We used wind speed and soil temperature projections at the regional scale from the CRCM5 regional climate model (RCM) driven by the CanESM2 global climate model (GCM) under two representative concentration pathways (RCP4.5, RCP8.5), for a baseline (1976–2005) and two future periods (2041–2070, 2071–2100). A hybrid mechanistic model (ForestGALES) that considers species resistance to uprooting and wind speed distribution was used to calculate windthrow risk. An increased risk of windthrow (3 to 30%) was predicted for the future mainly due to an increased duration of unfrozen soil conditions (by up to 2 to 3 months by the end of the twenty-first century under RCP8.5). In contrast, wind speed did not vary markedly with a changing climate. Strong regional variations in wind speeds translated into regional differences in windthrow risk, with the easternmost region (Atlantic provinces) having the strongest winds and the highest windthrow risk. Because of the inherent uncertainties associated with climate change projections, especially regarding wind climate, further research is required to assess windthrow risk from the optimum combination of RCM/GCM ensemble simulations.

The results of this study show that climate change could increase the risk of wind-related damage (windthrow), especially by shortening the period of time when the ground is frozen, which would affect the trees’ stability.

In this study, researchers measured the effect of climate change on the risk of windthrow in eastern Canada’s fir stands. To do this, they used a modelling approach that takes into consideration variations in both wind speed and length of time during which the ground is frozen, a variable that had not been taken into acount before. The study also made it possible to identify the regions of eastern Canada where the risk of windthrow is high.

This work will be useful in deepening our understanding of the impact of climate change on natural disturbances in Canadian forests. Windthrow plays a key role in forest dynamics and could lead to significant economic losses, particularly in managed forests. 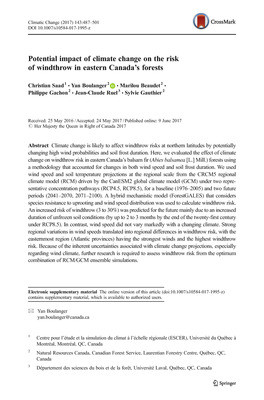