Local spatial variation in species distributions is driven by a mix of abiotic and biotic factors, and understanding such hierarchical variation is important for conservation of biodiversity across larger scales. We sought to understand how variation in species composition of understory vascular plants, spiders, and carabid beetles is associated with concomitant spatial variation in forest structure on a 1-ha permanent plot in a never-cut mixedwood forest in central Alberta (Canada). Using correlations among dendrograms produced by cluster analysis we associated data about mapped distribution of all living and dead stems > 1 cm diameter at breast height with distributions of the three focal taxa sampled from regular grids across the plot. Variation in each of these species assemblages were significantly associated with several forest structure variables at various spatial scales, but the scale of the associations varied among assemblages. Variation in species richness and abundance was explained mostly by changes in basal area of trees across the plot; however, other variables (e.g., snag density and tree density) were also important, depending on assemblage. We conclude that fine-scale habitat variation is important in structuring spatial distribution of the species of the forest floor, even within a relatively homogeneous natural forest. Thus, assessments that ignore within-stand heterogeneity and management that ignores its maintenance will have limited utility as conservation measures for these taxa, which are major elements of forest biodiversity.

This study aims to understand how the variation of understory plants, spiders, and ground beetles is associated with variation in forest structure at the stand level. We mapped all living and dead trees within a 1-ha plot in a mixedwood forest that had never been cut in central Alberta, and we sampled the three groups of organisms from regular grids across the plot. We measured the links between the distribution of these groups with various physical characteristics of the forest at different scales, which varied among species groups. Variation in number of species and abundance was explained mostly by changes in the basal area of trees (which is a measure of cross-sectional area at a specific height) across the plot; however, other variables (such as density of trees and snags) were also important, depending on the species group. We conclude that variation in fine-scale habitat helps explain the distribution of species on the forest floor, even within a natural forest. Assessments that ignore within-stand variability will have limited use for guiding effective conservation efforts for these organisms, which are major elements of diversity in the forest. 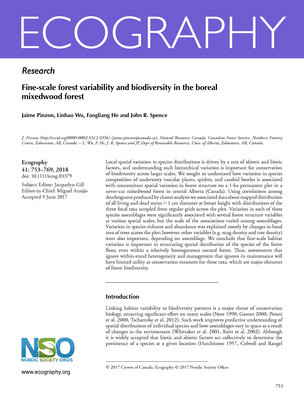