Ongoing climate change may undermine the effectiveness of protected area networks in preserving the set of biotic components and ecological processes they harbor, thereby jeopardizing their conservation capacity into the future. Metrics of climate change, particularly rates and spatial patterns of climatic alteration, can help assess potential threats. Here, we perform a continent-wide climate change vulnerability assessment whereby we compare the baseline climate of the protected area network in North America (Canada, United States, México—NAM) to the projected end-of-century climate (2071–2100). We estimated the projected pace at which climatic conditions may redistribute across NAM (i.e., climate velocity), and identified future nearest climate analogs to quantify patterns of climate relocation within, among, and outside protected areas. Also, we interpret climatic relocation patterns in terms of associated land-cover types. Our analysis suggests that the conservation capacity of the NAM protection network is likely to be severely compromised by a changing climate. The majority of protected areas (~80%) might be exposed to high rates of climate displacement that could promote important shifts in species abundance or distribution. A small fraction of protected areas (<10%) could be critical for future conservation plans, as they will host climates that represent analogs of conditions currently characterizing almost a fifth of the protected areas across NAM. However, the majority of nearest climatic analogs for protected areas are in nonprotected locations. Therefore, unprotected landscapes could pose additional threats, beyond climate forcing itself, as sensitive biota may have to migrate farther than what is prescribed by the climate velocity to reach a protected area destination. To mitigate future threats to the conservation capacity of the NAM protected area network, conservation plans will need to capitalize on opportunities provided by the existing availability of natural land-cover types outside the current network of NAM protected areas.

As the climate changes, will existing protected areas (parks, conservation areas and other areas managed for long-term protection of nature) be able to conserve species as they do today? This study looked at the existing networks of protected areas across North America and climate projections to the end of the century (2071–2100). It considered how areas of certain temperatures or rainfall levels will move as climate changes, a concept called “climate velocity.” Will species be able to migrate fast enough to find areas where they can live? Will they be forced out of protected areas and, if so, what are their chances of survival outside of these areas? The study found that about 80% of today’s protected areas will have a high rate of climate change in this century, although in the future smaller tracts of land within protected areas may maintain climates that are similar to today’s climates. About 10% of current areas will become very important to conservation efforts, as their climate will be similar to the climate that now prevails in about one-fifth of protected areas. Climate may force species into unprotected areas where they are vulnerable, resulting in a “dead end” for some species or ecological processes. To deal with these threats, conservation plans need to take advantage of natural landscapes currently outside of these networks, which may become refuges for species in the future. 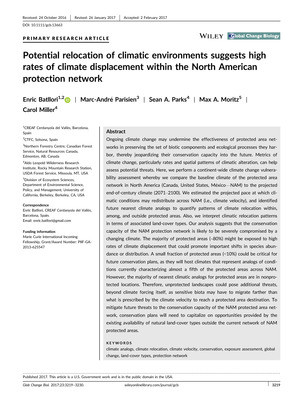