In the absence of large-scale stand replacing disturbances, boreal forests can remain in the old-growth stage over time because of a dynamic equilibrium between small-scale mortality and regeneration processes. Although this gap paradigm has been a cornerstone of forest dynamics theory and practice for decades, evidence suggests that it could be disrupted, threatening the integrity and sustainability of continuous forest cover. The objective of this study was to evaluate the gap dynamics in old-growth boreal forests across a large landscape where deer populations currently exist at high abundance. We hypothesized that chronic deer browsing is limiting recruitment, particularly of palatable species, creating a demographic disequilibrium between canopy mortality and recruitment. We analysed understory regeneration density and distribution in relation to canopy gap size and condition on multiple sample areas within a 360 km2 area of old-growth balsam fir (Abies balsamea [L.] Miller) forest on Anticosti Island, Canada. The combined effect of accelerating canopy gap expansion and recruitment failure created a demographic disequilibrium important enough to cause a loss of forest cover. The forest is now at risk of shifting to alternative successional pathways that seem to be dependent upon gaps size. Rather than sustaining historic balsam fir composition, succession in 57% of gap area was more susceptible to following a pathway leading toward white spruce parklands, while succession in the other 43% was more susceptible to following a pathway toward white spruce forests. The occurrence of these novel ecosystems represents a threat to biodiversity and ecosystem services that are provided by preindustrial forests. Climate change could exacerbate these threats by allowing deer to go into as yet unoccupied boreal forests that are driven by gap dynamics. Novel management issues will arise in these boreal ecosystems and challenge forest managers. When the traditional approaches of identifying gaps will not work because the forest itself is losing cover, the method we have developed will help forest managers recognize demographic disequilibrium threatening maintenance of forests.

The results of this study show that the increasing speed at which gaps expand due to tree death, and recruitment failure, which is mainly caused by the preferential browsing of balsam fir by deer, combine to create a great enough imbalance to result in forest cover loss. Instead of maintaining a balsam fir component, those gaps are more likely to result in open or closed stands of white spruce.

The purpose of this study was to assess gap dynamics at the landscape level in old boreal forests with significant white-tailed deer populations.

New management issues could arise in those ecosystems. The results of this research will help forest managers recognize the signs of imbalance that threaten forest conservation. Using exclosures and increasing deer hunting quotas to protect regeneration and planting species that can establish themselves rapidly could be considered to maintain or restore the regeneration process in boreal forest gaps. 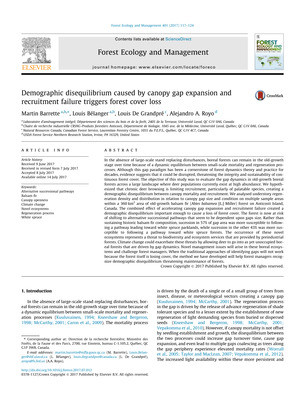