Biological material is at the forefront of research programs, as well as application fields such as breeding, aquaculture, and reforestation. While sophisticated techniques are used to produce this material, all too often, there is no strict monitoring during the “production” process to ensure that the specific varieties are the expected ones. Confidence rather than evidence is often applied when the time comes to start a new experiment or to deploy selected varieties in the field. During the last decade, genomics research has led to the development of important resources, which have created opportunities for easily developing tools to assess the conformity of the material along the production chains. In this study, we present a simple methodology that enables the development of a traceability system which, is in fact a by-product of previous genomic projects. The plant production system in white spruce (Picea glauca) is used to illustrate our purpose. In Quebec, one of the favored strategies to produce elite varieties is to use somatic embryogenesis (SE). In order to detect human errors both upstream and downstream of the white spruce production process, this project had two main objectives: (i) to develop methods that make it possible to trace the origin of plants produced, and (ii) to generate a unique genetic fingerprint that could be used to differentiate each embryogenic cell line and ensure its genetic monitoring. Such a system had to rely on a minimum number of low-cost DNA markers and be easy to use by non-specialists. An efficient marker selection process was operationalized by testing different classification methods on simulated datasets. These datasets were generated using in-house bioinformatics tools that simulated crosses involved in the breeding program for which genotypes from hundreds of SNP markers were already available. The rate of misidentification was estimated and various sources of mishandling or contamination were identified. The method can easily be applied to other production systems for which genomic resources are already available.

In this study, the researchers present a simple method for developing a biological material traceability system using genetic markers. The white spruce plant production system is used to illustrate this method.

Over the past decade, white spruce has been at the heart of a vast genetic improvement program, which has also benefited from genomics. In Quebec, one of the key strategies for producing superior plants is to use somatic embryogenesis. In order to detect human errors in this production process, the study had two main objectives: to develop a method that makes it possible to trace the origin of plants produced, and generate a unique fingerprint that could be used to differentiate each line and ensure its genetic monitoring.

The method can easily be applied to other production systems for which genomic resources are already available. 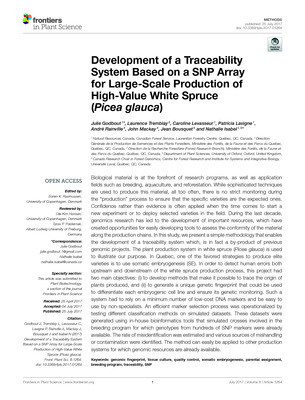