The spotted wing drosophila Drosophila suzukii Matsumura (Diptera: Drosophilidae), a pest of berries stone fruits, invaded North America and Europe in 2008. Current control methods rely mainly on insecticides. The sterile insect technique (SIT) has potential as an additional control tactic for the integrated management of D. suzukii. As a step towards the development of the SIT, this study aimed at finding the optimum irradiation dose to sterilize D. suzukii under controlled laboratory conditions. Four-day-old D. suzukii pupae were irradiated 12 to 24 hours prior to adult emergence in a 60Co Gamma Cell 220 and in a 137Cs Gamma Cell 3000 with doses of 30, 50, 70, 80, 90, 100 or 120 Gy. Emergence rate (88.1%), percent of deformed flies (4.0%) and survival curves were not affected by the tested irradiation doses. However, some reproductive parameters of the flies were affected by irradiation. Females irradiated with a dose of 50 Gy or more had almost no fecundity. When non-irradiated females were mated with irradiated males, egg hatch decreased exponentially with irradiation dose from 82.6% for the untreated control males to 4.0% for males irradiated with 120 Gy. Mortality of F1 individuals from the irradiated treatment also occurred during larval and pupal stages, with an egg to adult survival of 0.2%. However, descendants produced by the irradiated generation were fertile. These results are an encouraging first experimental step towards the development of the SIT for the management of D. suzukii populations.

In this study, the researchers tested radiation sterilization, a method used to control the spotted wing drosophila, an insect that affects fruit plantations, in a laboratory setting. They measured the effect of various doses on the fecundity and health of larvae. Here are the main results:

The spotted wing drosophila has been raging in North American and European fruit plantations (e.g., cherry, blueberry, grape) since 2008. Insecticides are the most frequently used control method. 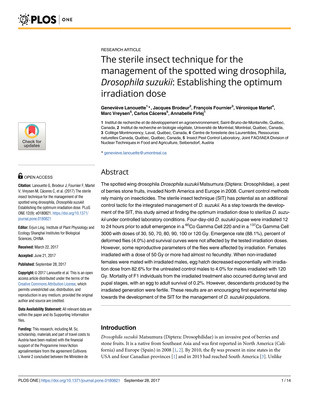