Stand dynamics in the boreal forest are driven by wildfire, and many think that emulating forest fire patterns during harvesting will adequately preserve biodiversity. We tested this hypothesis by examining saproxylic beetle assemblages from a chronosequence of aspen forest stands originating after wildfire or harvest across several age classes (1–2, 14–15, 28–29 years old) as well as from mature (60–80 years old) and overmature (>120 years old) stands of pyrogenic origin. Using window-traps attached to standing dead snags we collected over 6300 saproxylic beetles representing 310 species. Saproxylic beetle assemblages collected immediately post-fire and post-harvest differed significantly; however, by 30 years post-disturbance beetle assemblages had begun to converge with some general similarities evident among stands that were 28–29 years old. Beetle catch and richness was not greatly affected after fire; however, immediately following stand harvest there was a spike in species richness and beetle catch followed by a significant decrease in both metrics in the 29 year old stands. Cluster analysis and non-metric multidimensional scaling ordination indicated that assemblages from stands regenerating 1–2 years after fire and harvest were dissimilar from those of the other stand ages, and that samples from the burned stands tended to be more variable in composition than those from the harvested stands until our last sample 29 years post-disturbance. Saproxylic beetle assemblages were dominated by mycophagous and predatory species, with different species represented in stands regenerating after fire and harvest. Although the saproxylic beetle fauna of the western Canadian boreal forest seems reasonably resilient to disturbance in the present landscape context, retention of large-diameter coarse woody material in a variety of decay classes and selective burning of some residual woody material should facilitate recolonization by saproxylic species by retaining important microhabitat features that are rarefied by harvest. 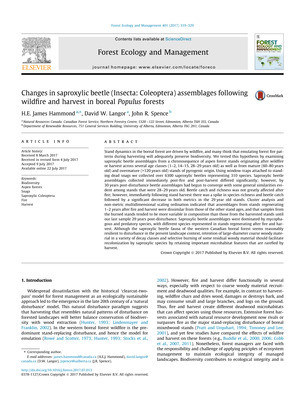