In this study, the researchers assessed the toxicity of two insecticides (tebufenozide and methoxyfenozide) on the whitemarked tussock moth. Methoxyfenozide was found to be 9 to 22 times more efficient for killing this insect’s larvae at the second stage and fourth stage of its development, respectively. Conversely, tebufenozide did not kill more than 70% of larvae at the fourth stage, even when used at high doses.

In light of these results, the researchers concluded that the resistance-inducing mechanism is either less efficient in older larvae for tebufenozide or totally inefficient for methoxyfenozide. 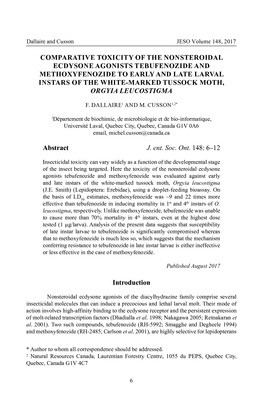