The objective is to describe two new genera of Mymaridae (a group of parasitic wasps in eggs of other insects) and re-describe a third genus based on fresh material. The key findings are that the new genera and species represent the earliest lineages in the evolution of the family. One genus is hypothesized to be the most primitive mymarid known, occurs only in Australia and is represented there by at least seven species (all described as new in the paper). It is most closely related to a similar genus from almost 80 million year old Canadian Cretaceous amber. The other two genera are also early lineages of Mymaridae. Two tribes are defined to include these three genera, together with a few others, both extinct and living. The scientific impact is that their discovery, and description, will permit a better higher classification of Mymaridae to be developed. 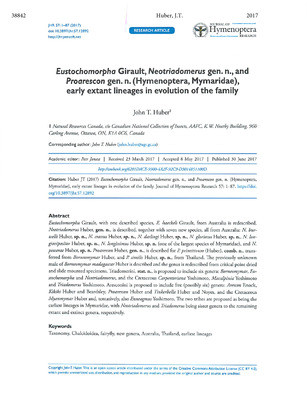