The Mexican genera of Mymaridae (Hymenoptera: Chalcidoidea) are keyed in English and Spanish, and a catalogue of species occurring in Mexico is presented. Thirty-six genera, including 79 named species in 20 of the genera, are reported. These are mentioned in about 100 publications either as original species descriptions or as publications that specifically mention species and/or specimens from Mexico. In the catalogue, species distributions by state are given based on litera ture records, and collection data are compiled from about 3630 specimens examined in eight collections in Canada, Mex ico and USA. Host are listed for specimens reared mainly in Mexico. A few extralimital host records are also given.

"The objective is to summarize all the literature on fairyflies (Mymaridae) published for the Mexican fauna and to write the first identification key to the genera so far recorded for Mexico. The second author wrote the key and the text, the first author prepared the illustrations and translated the key into Spanish. The third author is paying for the publication (presumably and hopefully for open access). The key findings are that the fauna is poorly known, with only 79 named species in 20 genera summarized in about 100 publications, many of them treating various aspects of the distribution and biology of the species in the two most important genera, Anagrus and Cosmocomoidea. (they parasitized the eggs of leafhoppers on various crops). We conclude by pointing out how poorly known is the taxonomy and biology of Mexican Mymaridae. This is the first study on the taxonomy and biology of this parasitic wasp family for the entire country and will permit researchers to identify to genus most specimens they collect or are studying. The catalogue is the first comprehensive literature summary for Mymaridae of Mexico. " 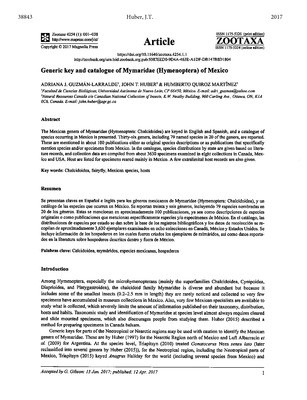