At the northernmost extent of the managed forest in Quebec, Canada, the boreal forest is currently undergoing an ecological transition between two forest ecosystems. Open lichen woodlands (LW) are spreading southward at the expense of more productive closed-canopy black spruce– moss forests (MF). The objective of this study was to investigate whether soil properties could distinguish MF from LW in the transition zone where both ecosystem types coexist. This study brings out clear evidence that differences in vegetation cover can lead to significant variations in soil physical and geochemical properties. Here, we showed that soil carbon, exchangeable cations, and iron and aluminium crystallinity vary between boreal closed-canopy forests and open lichen woodlands, likely attributed to variations in soil microclimatic conditions. All the soils studied were typical podzolic soil profiles evolved from glacial till deposits that shared a similar texture of the C layer. However, soil humus and the B layer varied in thickness and chemistry between the two forest ecosystems at the pedon scale. Multivariate analyses of variance were used to evaluate how soil properties could help distinguish the two types at the site scale. MF humus (FH horizons horizons composing the O layer) showed significantly higher concentrations of organic carbon and nitrogen and of the main exchangeable base cations (Ca, Mg) than LW soils. The B horizon of LW sites held higher concentrations of total Al and Fe oxides and particularly greater concentrations of inorganic amorphous Fe oxides than MF mineral soils, while showing a thinner B layer. Overall, our results show that MF store three times more organic carbon in their soils (BCFH horizons, roots apart) than LW. We suggest that variations in soil properties between MF and LW are linked to a cascade of events involving the impacts of natural disturbances such as wildfires on forest regeneration that determines the vegetation structure (stand density) and composition (ground cover type) and their subsequent consequences on soil environmental parameters (moisture, radiation rate, redox conditions, etc.). Our data underline significant differences in soil biogeochemistry under different forest ecosystems and reveal the importance of interactions in the soil–vegetation–climate system for the determination of soil composition.

In this study, the researchers showed that differences in vegetation cover density can cause significant variations in physical and geochemical soil properties at the northern limit of Quebec’s managed forests, where ecological transition zones are a major issue. Their work also showed that the soil of closed canopy black spruce forests stores three times as much organic carbon as that of open canopy lichen forests.

The purpose of this study was to determine whether soil characteristics could help distinguish between closed canopy black spruce forests and open canopy lichen forests, at the site level, within transition zones where these two ecosystems coexist.

The boreal forest is currently undergoing an ecological transition between two forest ecosystems. Open canopy lichen forests are expanding southwards to the detriment of closed canopy black spruce forests, which are more productive. The results of this study confirm that the present opening of black spruce forests is an ecological, economic and climatic issue with underlying long-term consequences, especially with regard to carbon sequestration capacity. 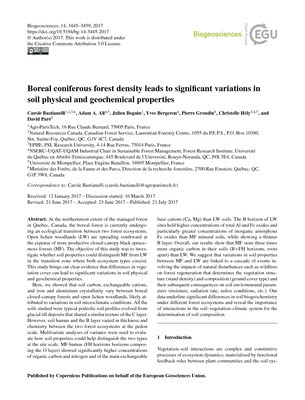