Research has demonstrated the potential of soil scarification, fertilization, and herbicide application to improve conifer seedling establishment and early growth. However, tree responses to and interactions among silvicultural treatments vary, making it difficult to predict mid- and long-term impacts of silviculture on stand productivity. We thus evaluated the 25-year effects of scarification and herbicide–fertilization combinations on black spruce (Picea mariana), jack pine (Pinus banksiana) and tamarack (Larix laricina) planted on a Kalmia angustifolia-dominated site. Our results show that the effects of scarification and herbicide–fertilization combinations diverged among species. Black spruce was the most responsive species to scarification for height and diameter at breast height. The combination of herbicide and fertilization treatments still had significantly positive effects on the long-term height and diameter growth of all species. Silvicultural treatments resulted in significant reductions in rotation length (based on height) when compared to height in nontreated-plots, depending on the species; reductions in years to attain a given height were greater for black spruce than for the other species. Our results illustrate the need to take species autecology into account when predicting productivity gains associated with early silviculture, and to provide managers with specific guidelines for the reforestation of ericaceous-dominated sites in Canadian boreal ecosystems.

Some recent cutovers in eastern Canada can become dominated by a forest shrub (Kalmia angustifoli) before a new crop of trees becomes established, and subsequent tree growth can be poor. A field trial was established in the 1980s to compare the effects of combinations of three different silvicultural treatments (±disc trenching x ±herbicide application x ±fertilization at planting) on the growth of three commercial species (black spruce, jack pine, eastern larch). After 25 growing seasons, scarification significantly increased the growth of black spruce but not the other two species; but the combination of herbicide and fertilization treatments significantly increased the tree height and diameter growth of all three species. It was estimated that scarifying before planting black spruce would give a time-gain of 5½ years compared to not scarifying, but only 3 and 1 years for pine and larch, respectively. Similarly, combining herbicide with fertilization would give a time gain of 6 years for these species, as compared to 4 years for herbicide alone and 1 year for fertilizer alone. Forest managers can use results of this trial to decide which combinations of reforestation treatments and species choices to apply to achieve their forest management objectives. 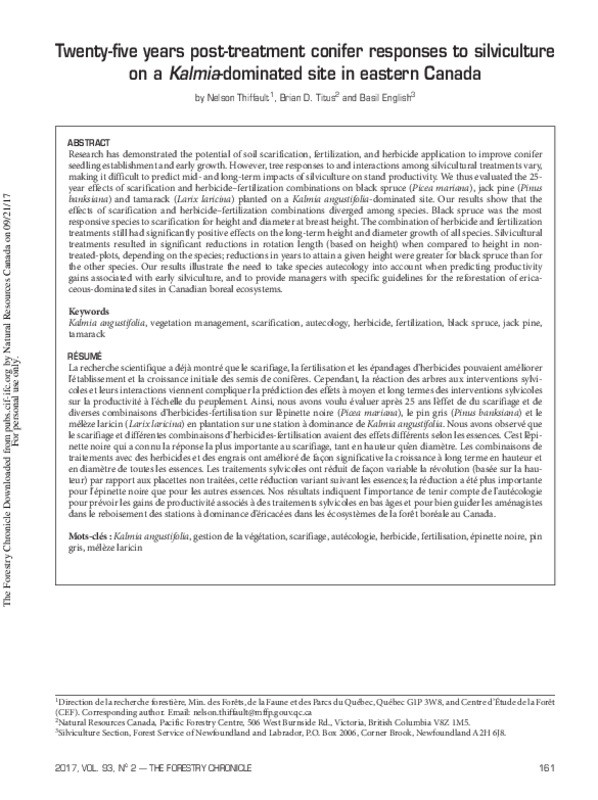