Fire activity in North American forests is expected to increase substantially with climate change. This would represent a growing risk to human settlements and industrial infrastructure proximal to forests, and to the forest products industry. We modelled fire size distributions in southern Quebec as functions of fire weather and land cover, thus explicitly integrating some of the biotic interactions and feedbacks in a forest-wildfire system. We found that, contrary to expectations, land-cover and not fire weather was the primary driver of fire size in our study region. Fires were highly selective on fuel-type under a wide range of fire weather conditions: specifically, deciduous forest, lakes and to a lesser extent recently burned areas decreased the expected fire size in their vicinity compared to conifer forest. This has large implications for fire risk management in that fuels management could reduce fire risk over the long term. Our results imply, for example, that if 30% of a conifer-dominated landscape were converted to hardwoods, the probability of a given fire, occurring in that landscape under mean fire weather conditions, exceeding 100,000 ha would be reduced by a factor of 21. A similarly marked but slightly smaller effect size would be expected under extreme fire weather conditions. We attribute the decrease in expected fire size that occurs in recently burned areas to fuel availability limitations on fires spread. Because regenerating burned conifer stands often pass through a deciduous stage, this would also act as a negative biotic feedback whereby the occurrence of fires limits the size of nearby future for some period of time. Our parameter estimates imply that changes in vegetation flammability or fuel availability after fires would tend to counteract shifts in the fire size distribution favoring larger fires that are expected under climate warming. Ecological forecasts from models neglecting these feedbacks may markedly overestimate the consequences of climate warming on fire activity, and could be misleading. Assessments of vulnerability to climate change, and subsequent adaptation strategies, are directly dependent on integrated ecological forecasts. Thus, we stress the need to explicitly incorporate land-cover's direct effects and feedbacks in simulation models of coupled climate-fire-fuels systems.

The size of wildfires is routinely assumed to be primarily driven by fire weather. In this study, we find that is not true in the boreal forest of Quebec: the resulting fire sizes were predominantly defined by land cover. An example consequence of this is that reducing the proportion of an area from conifer dominated to deciduous dominated by 30% of the area will reduce fire sizes by 21x. 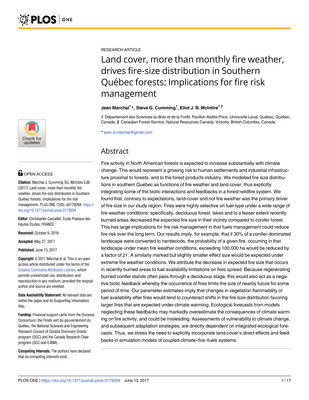