We estimate the mitigation potential of local use of bioenergy from harvest residues for the 2.3 × 106 km2 (232 Mha) of Canada's managed forests from 2017 to 2050 using three models: Carbon Budget Model of the Canadian Forest Sector (CBM-CFS3), a harvested wood products (HWP) model that estimates bioenergy emissions, and a model of emission substitution benefits from the use of bioenergy. We compare the use of harvest residues for local heat and electricity production relative to a base case scenario and estimate the climate change mitigation potential at the forest management unit level. Results demonstrate large differences between and within provinces and territories across Canada. We identify regions with increasing benefits to the atmosphere for many decades into the future and regions where no net benefit would occur over the 33-year study horizon. The cumulative mitigation potential for regions with positive mitigation was predicted to be 429 Tg CO2e in 2050, with 7.1 TgC yr−1 of harvest residues producing bioenergy that met 3.1% of the heat demand and 2.9% of the electricity demand for 32.1 million people living within these regions. Our results show that regions with positive mitigation produced bioenergy, mainly from combined heat and power facilities, with emissions intensities that ranged from roughly 90 to 500 kg CO2e MWh−1. Roughly 40% of the total captured harvest residue was associated with regions that were predicted to have a negative cumulative mitigation potential in 2050 of −152 Tg CO2e. We conclude that the capture of harvest residues to produce local bioenergy can reduce GHG emissions in populated regions where bioenergy, mainly from combined heat and power facilities, offsets fossil fuel sources (fuel oil, coal and petcoke, and natural gas).

This research examined the local use of bioenergy from harvest residues to mitigate climate change by reducing greenhouse gas (GHG) emissions over the medium term (2017 to 2050). It is important because it is the first ever in-depth examination of bioenergy-related mitigation potential at the national scale. The national results were developed through computer modelling of Canada’s 232-million hectares of managed forest, and were analyzed using the National Forest Carbon Monitoring, Accounting and Reporting System (NFCMARS) datasets and its core models, the Carbon Budget Model of the Canadian Forest Sector (CBM-CFS3) and the Carbon Budget Modeling Framework for Harvested Wood Products (CBMF-HWP). The study assessed the mitigation benefits, relative to a baseline, of capturing and burning harvest residues in place of progressive decay (and/or slashburning) and the use of fossil fuel-based energy. Reductions in GHG emissions were found in regions where harvest and populations were co-located, and where high emissions fuels such as coal and fuel oil are being used to produce heat and power. Increases in GHG emissions were found in regions where bioenergy exceeded local demand and bioenergy displaced low emissions electricity grids. The cost of implementation was not addressed in this paper but will be the subject of another journal article that is in preparation. 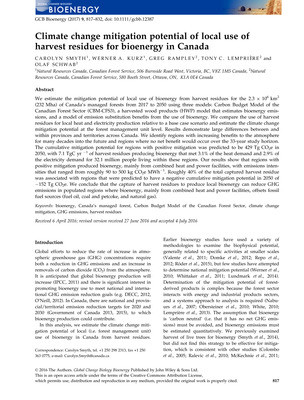