In the context of complex demands on forest resources and climate change, synoptic and spatially-explicit baseline data characterizing national trends in forest disturbance and subsequent return of vegetation (and eventual return to forest) are increasingly required. Time series analyses of remotely sensed data enable the retrospective generation of baseline data depicting both forest disturbance and recovery, enabling a more holistic examination of forest dynamics. In this research,we utilize the outputs of the Composite2Change, or C2C, algorithm that leverages the extensive Landsat archive to produce annual, gap-free, surface reflectance composites to date and label disturbance types and to characterize vegetation recovery over the >650 million ha of Canada's forested ecosystems. From 1985 to 2010, 57.5 Mha or 10.75% of Canada's net forested ecosystem area (exclusive of water) were disturbed by either wildfire or harvest, representing an annual rate of disturbance of approximately 0.43% per year. Wildfire accounted for 2.5 times more area disturbed than harvest. On average, wildfire disturbed 1.6 Mha annually and had greater inter-annual variability with a standard deviation of 1.1 Mha, compared to the 0.65 Mha disturbed annually by harvesting (σ = 0.1 Mha). Herein, we defined a longer-term measure of spectral recovery (the number of years it took for a pixel to attain 80% of its pre-disturbance Normalized Burn Ratio or NBR value), which indicated that harvested areas are recovering more consistently over time relative to areas disturbed by wildfire, with 78.6% of harvested areas requiring ≤10 years to recover, compared to only 35.5% of wildfire areas. A shorter-term (5-year) measure of spectral recovery, also based on the NBR, indicated that vegetation in wildfire areas returned more rapidly than harvested areas; however, when the magnitude of the disturbance was incorporated into the metric,with magnitude typically larger and more variable for wildfire areas, harvested areas were found to be recovering more rapidly on average in the short-term.Overall, <1% of the areas disturbed by wildfire and harvest were identified as non-recovering by all three spectral measures of recovery used in our analysis. Regionally, trends in disturbance and recovery largely echoed trends found at the national level, although the relative amounts and rates of wildfire or harvest varied by ecozone. Time series Landsat composites provide an opportunity to characterize relative trends in disturbance and recovery at a national scale, by disturbance type and ecozone, in a spatially explicit manner and at a level of spatial detail that is relevant to both forest management and science.

Objective: Demonstrate technical capacity and characterize national trends in stand replacing forest disturbance caused by wildfire and harvest, and subsequent vegetation regrowth, for the period 1985–2010. Using Landsat time series data, this is the first wall-to-wall characterization of wildfire and harvest and subsequent vegetation recovery in Canada at a spatial resolution commensurate with human impacts. Major findings: 57.5 Mha or 10.8% of Canada's forested ecosystems were disturbed by either wildfire or harvest, representing an annual rate of disturbance of approximately 0.4% per year; Wildfire accounted for 2.5 times more area disturbed than harvest. On average, wildfire impacted 1.5 Mha annually, compared to 0.65 Mha impacted by harvesting. Moreover, the amount of area impacted by wildfire was much more variable annually (σ = 1.5 Mha) when compared to harvest (σ= 0.1 Mha); Regionally, boreal ecozones had the greatest absolute area of disturbance from both wildfire (Boreal Shield West) and harvest (Boreal Shield East); Spectral recovery metrics indicate that vegetation returns following disturbance; Areas impacted by harvest exhibited more rapid spectral recovery rates; 78.6% of areas impacted by harvest having a mean recovery time ≤ 10 years, compared to only 35.5% of areas impacted by wildfire. 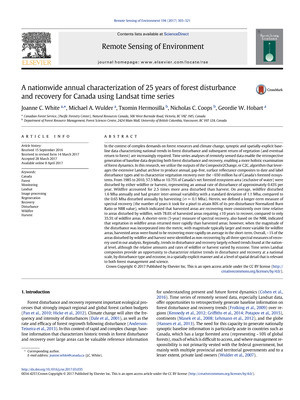