The objective of the chapter is to update that found in the first edition of the book Insect Biodiversity: Science and Society, published several years previously. The chapter gives an overview of the order Hymenoptera, with sections on evolution and higher classification, numbers of described species and individuals, morphological and biological diversity, importance to humans, ecological importance, conservation, fossils, collecting, preserving and study techniques, taxonomic diversity, summary and conclusions. The estimated numbers of described species of both extant species and fossil species are tabulated for each superfamily and family. The Order consists of about 154,000 described species (8000 sawflies, 146,000 parasitic and stinging wasps, bees, and ants). About 300 references are cited and listed. The impact is to inform the general reader about the diversity and importance of Hymenoptera. The key conclusion is that the parasitic wasps are still woefully understudied taxonomically compared to the sawflies and stinging wasps, bees and ants. 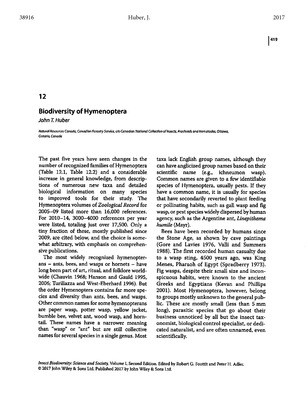