Forests are an important component of the global carbon (C) cycle: they can capture and retain large amounts of C annually, depending on stand characteristics, climate, and disturbance regimes. With climate and disturbance regimes shifting, it is important to be able to accurately represent the corresponding changes in forest C dynamics with well-calibrated models. The Carbon Budget Model of the Canadian Forest Sector (CBM-CFS3) is a widely used model for simulating C dynamics in managed forests at stand, regional, and national levels. Here, we use a Bayesian Markov Chain Monte Carlo (MCMC) technique to calibrate the parameters in the CBM-CFS3 by assimilating C stocks of six deadwood and soil pools estimated from data collected from 635 plots within the Canadian National Forest Inventory. Calibration led to most improvement in the simulation of C stocks in small and fine woody debris, reducing RMSE by 54.3%, followed by the snag stems (RMSE reduced by 23.2%), and coarse woody debris (13%).The calibrated parameters resulted in increased rates of C cycling in fine and coarse woody debris and the soil organic layer, distinct C dynamics in hardwood and softwood dominated stands, and increased temperature sensitivity of the C contained in the mineral soil. While parameter calibration considerably improved the simulation of the small and fine woody debris and snags stem pools, model representation of the branch snag, coarse woody debris, soil organic layer, and mineral soil pools were not substantially improved. Lack of substantial improvements in the calibrated model performance indicated the need for including additional processes in C dynamics simulation or a change in the modelling paradigm. We illustrate the potential need to include a lignin effect on deadwood decay and suggest further exploration of the effects of tree species, soil types, and mosses on performance of the CBM-CFS3.

Forests are important to the global carbon cycle because they take up and store large amounts of carbon from the atmosphere. The amount of carbon that moves between the atmosphere and a forest depends on the type of trees in the forest, the climate, and how the forest is affected by disturbances such as wildfire and harvesting. Computer models must be used to calculate the amount of carbon moving between the atmosphere and forests in Canada because the forested area in Canada is very large. Here we tried to determine the best values for some of the equations used in the Carbon Budget Model of the Canadian Forest Sector (CBM-CFS3), to improve the model’s performance. A large amount of data collected for the Canadian National Forest Inventory was used to simultaneously determine 45 values for equations in the model that calculate how much carbon is contained in deadwood and soils, and how much carbon is released as carbon dioxide from deadwood and soils. We decided some of the new values were good, but in other cases more work is needed to improve how we represent deadwood and soil in the CBM-CFS3. The resulting equations will help Canada do a better job reporting on the contribution of Canada’s managed forest area to this country’s carbon dioxide emissions. 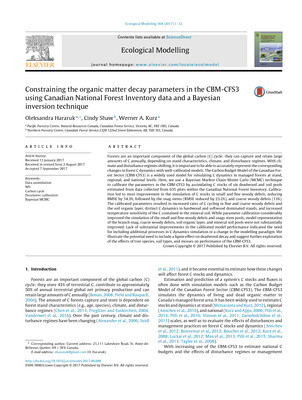