Within a plantation of clonal somatic embryo-derived white spruce trees that belonged to four genotypes, one genotype (G6) has consistently responded for the last 16 years, to the induction of somatic embryogenesis within primordial shoot explants. Analysis of fourteen individuals within this genotype subsequently revealed a group of clonal trees that were nonresponsive. This in turn provided a unique opportunity to conduct differential gene expression analysis in the absence of genotype-specific factors. Absolute qPCR was first used to expand the analysis of several genes previously identified via microarray analysis to be differentially expressed during SE induction, along with the inclusion of two nonresponsive genotypes. While this demonstrated a high level of repeatability within, and between, responsive and nonresponsive genotypes, it did not support our previous contention that an adaptive stress response plays a role in SE induction responsiveness, at least with respect to the candidate genes we analyzed. RNAseq analysis was then used to compare responsive and nonresponsive G6 primordial shoots during the somatic embryogenesis induction treatment. Although not analyzed in this study, this included samples of callus and embryonal masses previously generated from G6 explants. In addition to revealing a large number of differentially expressed genes, de novo assembly of unmapped reads was used to generate over 25,000 contigs that potentially represent previously unidentified transcripts. This included a MADS-domain gene that was found to be the most highly differentially expressed gene within responsive shoot explants during the first seven days of the induction treatment.

Somatic embryogenesis is a biotechnology that uses bud tissue culture to create a large number of somatic embryos that mature into plants. 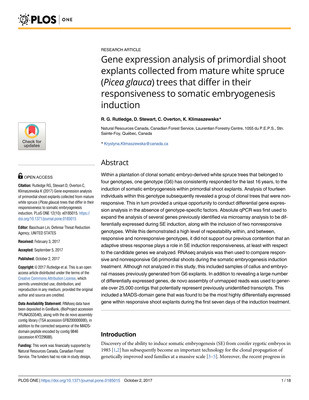