Eastern spruce budworm (Choristoneura fumiferiana Clemens) (ESBW) is a major forest pest which feeds on young shoots of white spruce (Picea glauca) and can cause landscape level economic and ecological losses. Release of acetophenone metabolites, piceol and pungenol, from their corresponding glycosides, picein and pungenin, can confer natural resistance of spruce to ESBW. A beta-glucosidase gene, Pgβglu-1, was recently discovered and the encoded enzyme was characterized in vitro to function in the release of the defensive acetophenone aglycons. Here we describe overexpression of Pgβglu-1 in a white spruce genotype whose metabolome contains the glucosylated acetophenones, but no detectable amounts of the aglycons. Transgenic overexpression of Pgβglu-1 resulted in release of the acetophenone aglycons in planta. This work provides in vivo evidence for the function of Pgβglu-1.

In this study, the researchers describe an overexpressed gene in white spruce. Its corresponding enzyme ensures the production of certain molecules that have a role to play in spruce resistance to spruce budworm (SBW). The overexpression of this gene results in the release of aglycone compounds in the tree and provides in vivo evidence of its function in white spruce resistance to SBW.

Pungenol and piceol aglycones are organic compounds of active defense that contribute to spruce resistance to SBW.

Thanks to advances made in genomics, it is now possible to study all the genetic characteristics of a living organism and to understand how they function. 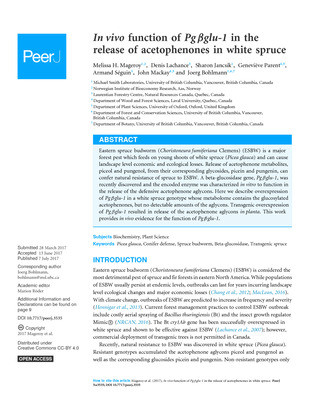