The length of the fire cycle is a critical factor affecting the vegetation cover in boreal and temperate regions. However, its responses to climate change remain poorly understood. We re-analysed data from earlier studies of forest age structures at the landscape level, in order to map the evolution of regional fire cycles across Eastern North American boreal and temperate forests, following the termination of the Little Ice Age (LIA). We demonstrated a well-defined spatial pattern of post-LIA changes in the length of fire cycles towards lower fire activity during the 1800s and 1900s. The western section of Eastern North America (west of 77 °W) experienced a decline in fire activity as early as the first half of the 1800s. By contrast, the eastern section showed these declines as late as the early 1900s. During a regionally fire prone period of the 1910s-1920s, forests in the western section of Eastern boreal North America burned more than forests in the eastern section. The climate appeared to dominate over vegetation composition and human impacts in shaping the geographical pattern of the post-LIA change in fire activity. Changes in the atmospheric circulation patterns following the termination of the LIA, specifically changes in Arctic Oscillation and the strengthening of the Continental Polar Trough, were likely drivers of the regional fire dynamics.

He researchers describe a well-defined spatial pattern of changes in the length of fire cycles across eastern North American boreal and temperate forests following the Little Ice Age. They demonstrated that fire activity was lower during the 1800s and 1900s. Large-scale features of atmospheric circulation in the boreal forest have affected spatial variability in fire activity. Climate has influenced this variability more than forest composition and human activity.

In this study, the researchers re analyzed data from earlier studies to map the regional evolution of fire cycles across eastern North American boreal and temperate forests. 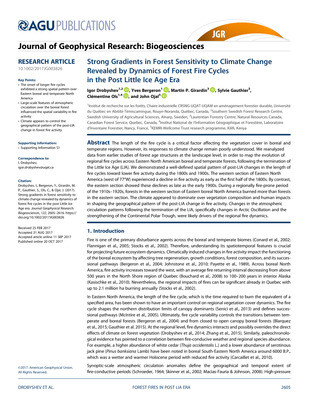