Heterobasidion irregulare is a basidiomyceteous forest pathogenic fungus which causes a root disease capable of killing large trees. Infection probability is proportional to the density of aerial basidiospores infecting freshly cut stumps. The purpose of this study was to quantify for the first time H. irregulare aerial basidiospore density in southern Québec and to determine the importance of a local basidiospore load from a nearby infested plantation. Spore counts from automated rotary arm spore collectors were assayed using a ribosomal ITS TaqMan real-time PCR detection assay. Cumulative basiodiospore deposits on a 30-cm stump were estimated to be highest in the infected plantation with 2.37 basidiospores per stump, with decreasing count of 0.52 basidiospores at a 500-m distance and 0.46 basidiospores at a 1.5-km distance. At 5 km from the infected plantation, the number of basidiospores deposited on a stump was 0.22, a value similar to those at distances of 25 and 140 km. Since a single Heterobasidion basidiospore may travel as far as 500 km, the level detected at 5 km may represent the background basidiospore load resulting from long-distance dispersal, and basidiospores from a nearby infected plantation are unlikely to be an added risk of infection to plantations located more than 5 km away. Long distance aerial basidiospore dispersal will remain for now the most important constant source of infectious H. irregulare in Québec. Despite the very low risk level per stump in this study, the large number of trees thinned annually warrants that stump treatment with Rotstop® C is still the best strategy, especially in valuable plantations.

In this study, the researchers determined that the cumulative number of Heterobasidion irregulare spores found more than 5 km away from an infected plantation could be considered the reference rate for the spread of this fungus over long distances. Heterobasidion irregulare is the fungus responsible for annosum root disease which affects pines, especially in plantations. There is little chance of locally-produced spores causing further risk of infection at distances over 5 km. The maximum deposition rate observed was very low, which indicates that the outbreak of this disease is in its early stages in Quebec.

Heterobasidion irregulare is a forest pathogenic fungus capable of killing large trees, and the risk of infection is proportional to the number of airborne spores that land on freshly cut red pine stumps. The goal of this study was to quantify spore density in southern Quebec for the first time and to establish the importance of local spores from an infected plantation located neayby. Heterobasidion irregulare spores are known to travel over distances of up to 500 km. 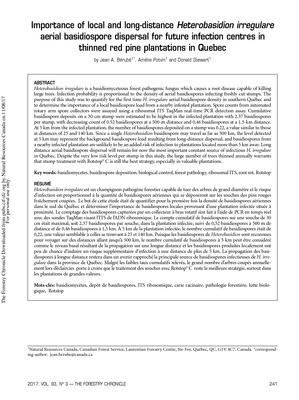