The gypsy moth, Lymantria dispar L., is one of the most destructive forest pests in the world. While the subspecies established in North America is the European gypsy moth (L. dispar dispar), whose females are flightless, the two Asian subspecies, L. dispar asiatica and L. dispar japonica, have flight-capable females, enhancing their invasiveness and warranting precautionary measures to prevent their permanent establishment in North America. Various molecular tools have been developed to help distinguish European from Asian subspecies, several of which are based on the mitochondrial barcode region. In an effort to identify additional informative markers, we undertook the sequencing and analysis of the mitogenomes of 10 geographic variants of L. dispar, including two or more variants of each subspecies, plus the closely related L. umbrosa as outgroup. Several regions of the gypsy moth mitogenomes displayed nucleotide substitutions with potential usefulness for the identification of subspecies and/or geographic origins. Interestingly, the mitogenome of one geographic variant displayed significant divergence relative to the remaining variants, raising questions about its taxonomic status. Phylogenetic analyses placed this population from northern Iran as basal to the L. dispar clades. The present findings will help improve diagnostic tests aimed at limiting risks of AGM invasions.

In this article, the researchers studied the factors that influence the prevalence of butternut canker based on data collected across the province of Quebec. Here are the main results:

In Canada, the butternut is threatened by an exotic disease: butternut canker. The disease currently occurs throughout the butternut’s range in North America, causing branch and stem cankers, dieback, and tree mortality. 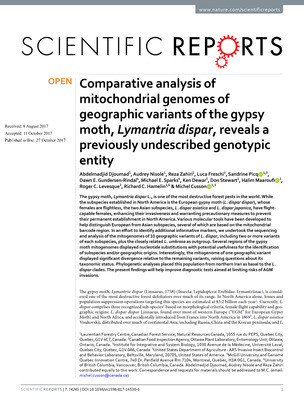