Heterobasidion irregular (Underw.) Garbel. & Otrosina is an important fungal parasitic basidiomycete of coniferous trees throughout temperate regions of the world. In Canada, the disease was first reported on red pine in Ontario in 1955, then in Quebec in 1989. As infection probability is proportional to the density of its aerial basidiospores infecting freshly cut pine stumps, the purpose of this study was to quantify the H. irregular aerial basidiospore deposition along a southern Quebec transect. Spore counts from automated rotary arm collectors were determined by using a ribosomal ITS TaqMan real-time PCR detection assay. Total count was performed on rods at each location, with the highest score of 706.3 spores in Harrington, then 459.6 spores in Cowansville, rapidly decreasing to 52.3 spores in Compton and reaching lows in St-Aubert and Rimouski, with an eastward direction on the transect. Clearly, plantations in southwestern Quebec are at a higher risk of infection than anywhere else in the province. With few exceptions, weekly spore depositions at all sites other than Harrington were greatly below 0.2 per m-2 h-1. Despite this very low spore deposition rate observed in one season, the large number of trees thinned annually warrants that stump treatment with Rotstop® C is still the best strategy, especially in valuable plantations, to prevent against infection by Heterobasidion.

In this study, the researchers determined that red pine plantations in southwestern Quebec were at a higher risk of infection by Heterobasidion irregular, the fungus responsible for annosum root disease, than anywhere else in the province. The number of spores captured decreased from west to east. With a few exceptions, spore deposits at all sites other than the one in Harrington were very low, which indicates that we are in the early stages of an outbreak in Quebec.

Heterobasidion irregular is a forest pathogenic fungus capable of killing large trees, and the risk of infection is proportional to the number of airborne spores landing on freshly cut red pine stumps. The purpose of this study was to quantify Heterobasidion irregular aerial spore deposits in southern Quebec in order to target priority regions for interventions. 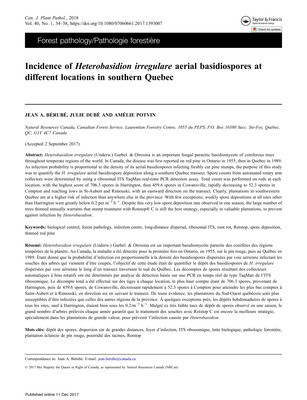