Hybridization between species is known to greatly affect their genetic diversity and, therefore, their evolution. Also, within species, there may be genetic clusters between which gene flow is limited, which may impact natural selection. However, few studies have looked simultaneously at the influence of among-species and within-species gene flow. Here, we study the influence of hybridization between Populus balsamifera and Populus trichocarpa on population structure and adaptation in P. balsamifera. We did this by sampling a total of 1517 individuals from across the ranges of these two species, and by genotyping them using a combination of 93 nuclear and 17 cpDNA SNPs. We found that hybridization is mostly limited to the contact zone where the species’ distributions overlap. Within P. balsamifera, we found multiple levels of population structure. Interestingly, the border between the Eastern and Central clusters is very sharp, whereas the border between the Central and Western clusters is diffuse. Outlier analysis revealed that three loci associated with the sharp border were also associated with climate. We hypothesize that the observed clusters derive from three refugia during the Pleistocene ice ages. Between the Central and Western clusters, post-glacial long-distance gene flow has led to the diffusion of their border. In the Eastern cluster, we hypothesize that endogenous genomic barriers have developed, leading to the sharp border and a spurious climate association. We conclude that the large-scale genetic structure of P. balsamifera is mostly shaped by historical factors and the influence of interspecific hybridization is limited. 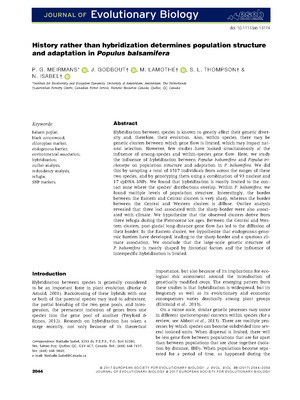