The results of this study suggest that the increase in forest fires and the impacts of climate change at the stand level would have the most significant consequences on future forest vegetation according to most greenhouse gas emission scenarios. Simulations predict that the greatest impacts would mostly occur after 2050. In addition to the effect of harvesting on forest landscapes, researchers demonstrated that increases in fire activity and the direct impacts of climate change on growth and regeneration would be the most significant factors in future changes to the landscapes within the southern boreal forest of Canada.

In this study, the researchers assessed how various factors contributed to ecosystemic changes at the stand and landscape levels and evaluated the effects of harvesting on biomass (total and by species) in Canada’s southern boreal forest according to three climate scenarios. 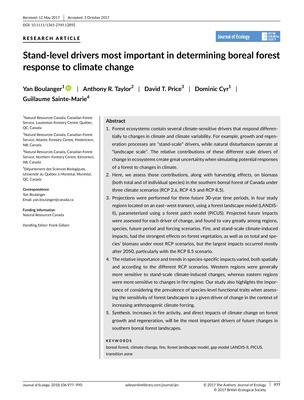