Gene copy number variation (CNV) has been associated with phenotypic variability in animals and plants, but a genomewide understanding of their impacts on phenotypes is largely restricted to human and agricultural systems. As such, CNVs have rarely been considered in investigations of the genomic architecture of adaptation in wild species. Here, we report on the genetic mapping of gene CNVs in white spruce, which lacks a contiguous assembly of its large genome (~20 Gb), and their relationships with adaptive phenotypic variation. We detected 3,911 gene CNVs including de novo structural variations using comparative genome hybridization on arrays (aCGH) in a large progeny set. We inferred the heterozygosity at CNV loci within parents by comparing haploid and diploid tissues and genetically mapped 82gene CNVs. Our analysis showed that CNVs were distributed over 10 linkage groups and identified four CNV hotspots that we predict to occur in other species of the Pinaceae. Significant relationships were found between 29 of the gene CNVs and adaptive traits based on regression analyses with timings of bud set and bud flush, and height growth, suggesting a role for CNVs in climate adaptation. The importance of CNVs in adaptive evolution of white spruce was also indicated by functional gene annotations and the clustering of 31% of the mapped adaptive gene CNVs in CNV hotspots. Taken together, these results illustrate the feasibility of studying CNVs in undomesticated species and represent a major step towards abetter understanding of the roles of CNVs in adaptive evolution.

Significant relationships were found for 29 of the 4,000 genes studied. These genes are involved in bud development and height growth, suggesting that CNV could play a role in the adaptation of white spruce to climate. 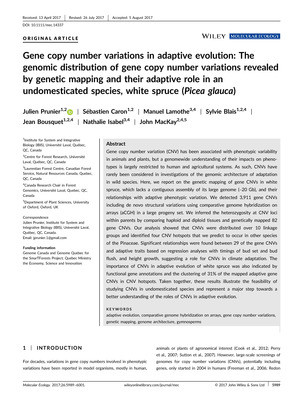