Eastern (Tsuga Canadensis) and Carolina hemlocks (T. caroliniana) of eastern North America have been attacked by the non-native hemlock woolly adelgid (Adelges tsugae Annand) (HWA) since the first half of the 20th century. Unlike most insects, HWA develops through one generation from fall to late winter, exposing this insect to the lethal effects of winter temperatures. The mortality inflicted by winter temperatures on HWA determines the surviving population density as well as its ability to spread to uninfested areas. With the ongoing changes in climate, knowledge of this species’ ability to survive and spread in the future can help land managers prepare for its management. This study began during the winter of 2014 and ended in the spring of 2017. During this period, winter mortality of HWA was recorded at 100 sites from Maine to Georgia (n = 209). Changes in population density from the sistens to the succeeding progrediens generation were recorded at 24 sites (n = 35). Models were developed to predict HWA mortality using the lowest minimum temperature prior to the mortality assessment date, the number of days with mean temperature <-1 °C, and the mean daily temperature of the three days preceding that minimum. Models were also developed to predict population density changes from the overwintering sistens generation to the following progrediens generation. Future projections under climate change showed increases in winter survival and population growth rates over time. Especially towards the northeastern edge of T. canadensis’ distribution as minimum temperatures are predicted to increase at a greater rate. This will result in an increase in density throughout its current distribution and expansion northward causing an increase in its impact on eastern Tsuga spp.

In this study, the researchers showed that the winter survival rate of the hemlock woolly adelgid (HWA), native to Asia, will increase in the future, especially in the north of the Eastern hemlock’s distribution area. To reach this conclusion, the researchers used predictive models and considered projected changes in climate. The increased survival rate of the HWA will in turn increase the size of its populations and the risk of an epidemic. Only Eastern hemlock stands located in the northernmost portion of its distribution area and at higher altitudes may escape HWA attack. It is therefore important to continue control efforts in the regions affected by this insect pest, especially in the north of its distribution area.

The HWA mainly affects hemlock trees and can cause complete defoliation. Tree mortality can occur within a few years. 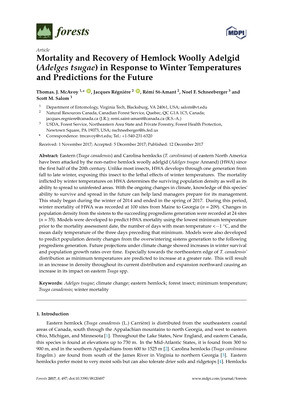