Species of Hydrosmecta C. G. Thomson, occurring in eastern Canada, are studied and reviewed. Six species are recognized, and two of them are described as new to science. The new species are: Hydrosmecta Canadensis Webster and Klimaszewski, new species, and Hydrosmecta minutissimoides Webster and Klimaszewski, new species. Two species described in the USA are recorded from Canada and New Brunswick for the first time: Hydrosmecta caduca Casey and Hydrosmecta dulcis Casey. New distribution and collection data, diagnoses, a key for species identification, and images of habitus and genital structures are provided. Hydrosmecta newfoundlandica Klimaszewski and Langor, 2011, is transferred to the genus Atheta Thomson based on morphology of genital structures.

In this article, the researchers focused on beetle species of the genus Hydrosmecta C. G. Thomson living in eastern Canada.

They identified six species of Hydrosmecta. Two were identified for the first time, one of which was named H. Canadensis in celebration of Canada’s 150th anniversary. Two others species already found in the United States were reported for the first time in Canada. The researchers also provided a description of these insects and produced images of their bodies and genital structures. The article also includes an identification key and habitat data.

Taxonomy is a science that classifies living organisms. It is mainly used in biodiversity studies or in assessments of the impact of human activity on forest ecosystems. 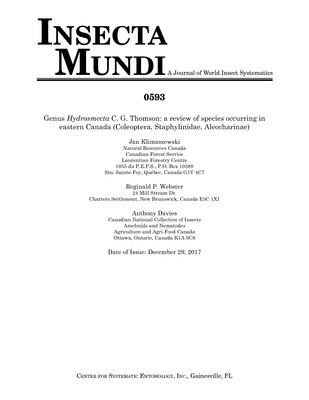