High abundance of large herbivore has major impacts on the composition, structure, and functioning of forest ecosystems, which can result in regeneration failures. Reduction of large herbivore density, however, does not warrant the successful establishment of tree species sensitive to browsing. In such contexts, planting in combination with silvicultural treatments can be used to restore forest cover over large areas. Using an experimental plantation on Anticosti Island (Quebec, Canada), we investigated how white-tailed deer (Odocoileus virginianus) browsing affects the performance of planted balsam fir (Abies balsamea L. Mill.) seedlings following site preparation and mechanical release. After seven growing seasons, seedling height, leader length and ground-level diameter were 30% bigger in fenced plots compared to unfenced ones as a result of cumulative browsing. Seedling survival was low (62%) and unaffected by either silvicultural treatments or deer after the onset of the mechanical release treatment. Site preparation and mechanical release did not improve morphological parameters and did not increase browsing occurrence on fir, likely because they had little influence on surrounding plants that compete for resources and may hide seedlings from deer 7 years after planting. Selective browsing on neighbouring plants also acted as a release treatment for balsam fir seedlings, allowing them to reach full sunlight at a lower height (125–146 cm), compared to fir seedlings in deer exclosures (161–184 cm). We propose that managers aim at target deer densities that promote browsing positive effects. In such context, prescription for site preparation and mechanical release should be based on other considerations than promoting seedling growth, such as facilitating practical reforestation work.

In this study, the researchers observed the effect of white-tailed deer grazing on the performance of balsam fir seedlings planted on Anticosti Island. After 7 years, the height and diameter of the seedlings at ground level were 30% greater in fenced-off plots than in unfenced ones.

However, the researchers also observed a positive effect of deer grazing. Indeed, in the unfenced plots, the selective grazing of neighbouring plants helped clear space for the balsam fir seedlings, giving them unobstructed access to light at a lower height, compared with the seedlings in the fenced-off plots. This will have a positive effect on the seedlings’ growth.

In light of these results, the researchers recommend that forest managers aim to maintain a density of deer population that will promote the positive effects of grazing. 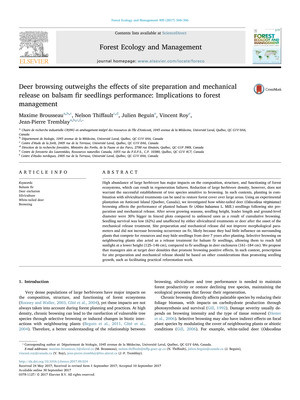