Conifers have complex defense responses to initial attacks by insects and pathogens that can have cascading effects on success of subsequent colonizers. However, drought can affect a plant’s ability to respond to biotic agents by potentially altering the resources needed for the energetically costly production of induced defense chemicals. We investigated the impact of reduced water on induced chemical defenses of jack pine (Pinus banksiana) seedlings from initial attack by biotic agents and resistance to subsequent challenge inoculation with a pathogenic fungal associate of mountain pine beetle (Dendroctonus ponderosae), Grosmannia clavigera. Applications of phytohormones (methyl salicylate and methyl jasmonate) and G. clavigera were used for initial induction of defenses. Monoterpene concentrations varied with initial induction from fungal and phytohormone application while watering treatment had no effect. Seedlings treated with G. clavigera and methyl jasmonate had the greatest monoterpene concentrations compared to the control and methyl salicylate-treated seedlings. However, the monoterpene response to the challenge inoculation varied with watering treatments, not with prior induction treatments, with lower monoterpene concentrations in fungal lesions on seedlings in the low to moderate watering treatments compared to normal watering treatment. Furthermore, prior induction from phytohormones resulted in systemic cross-induction of resistance to G. clavigera under normal watering treatment but susceptibility under low watering treatment. Seedlings stressed by low water conditions, which also had lower stomatal conductance than seedlings in the normal watering treatment, likely allocated resources to initial defense response but were left unable to acquire further resources for subsequent responses. Our results demonstrate that drought can affect interactions among tree-infesting organisms through systemic cross-induction of susceptibility.

Extreme weather events such as drought, which are expected to become more frequent and prolonged, may affect a tree’s ability to defend against the multitude of attacking organisms that it experiences throughout its long life. We assessed the effects of drought on induced chemical defenses in jack pine to proxies for multiple attacking organisms and a fungal associate Grosmannia clavigera of an ecologically and economically important bark beetle (mountain pine beetle). We then identified whether this initial defensive response to multiple organisms resulted in the subsequent tree susceptibility to the same fungus. In a greenhouse experiment, we found that prior application of proxies for multiple attacking organisms led to subsequent resistance of jack pine to the bark beetle-associated fungus under normal water conditions. However, under drought conditions, prior application of proxies for multiple attacking organisms led to subsequent susceptibility to the fungus. Our results demonstrate that drought can affect interactions among tree-infesting organisms, which could have consequences for mountain pine beetle as it moves into jack pine in the boreal forest. 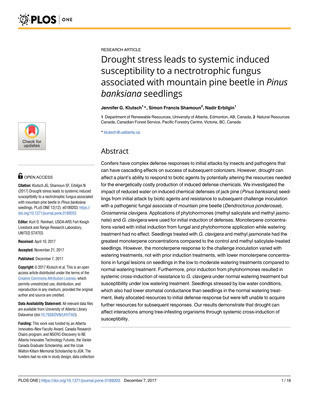