The ability to predict key phenological events, such as the timing of flight periods, is useful for the monitoring and management of insect pests. We used empirical data to describe the flight period of mountain pine beetle, Dendroctonus ponderosae Hopkins, in its recently expanded range east of the Rocky Mountains in Canada and developed a degree-day model based on the number of trapped beetles. Data were collected over four degrees of latitude and six years. The main flight period, when the middle 70% of the total number of beetles were caught, started during the second or third week of July, lasted 26 d, and peaked within 2 wk of starting. The best model accounted for 89% of the variation in the data. Mountain pine beetle's flight tended to start later and be more contracted at higher latitudes. The synchrony of mountain pine beetle's flight period in the expanded range appears to be comparable to the limited reports from the historic range, although it may start earlier. This suggests that conditions in the new range are suitable for a coordinated dispersal flight, which is critical for the beetle's strategy of overwhelming tree defenses by attacking en masse. Forest managers can use the model to support operational decisions, e.g., when to impose hauling restrictions to reduce the risk of spread through the transport of infested material, or the time frame for control programs. Understanding the flight period may also improve our ability to assess the response of mountain pine beetle to novel and changing climates in the future. 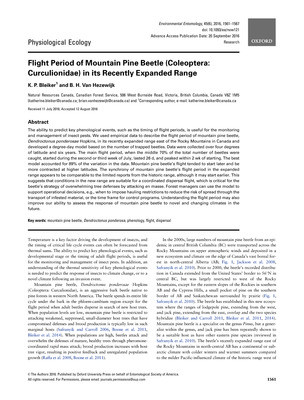