The Walter Soyka species of Anaphes Haliday are reviewed and placed in context among the remaining world species. An analysis of his descriptions and identification keys is presented, and discussed in light of a broader interpretation of intraspecific variation in Anaphes species than Soyka accepted. An illustrated diagnosis of Anaphes is given and the species in Europe considered to be valid are keyed—14 species in Anaphes (Anaphes) and 15 species in Anaphes (Patasson). The 244 names of world Anaphes are tabulated in various ways and their type localities, if known, are mapped. All available valid names and their synonyms, mostly from among the 155 nominal species described by Soyka, are catalogued, with details of type material and collecting information. A total of 167 synonyms are listed, 17 of which are synonyms proposed by earlier authors and 149 of which are proposed as new synonyms. Lectotypes are designated for Mymar ferreirei Soyka and Yungaburra acutiventris Soyka. Nine nomina dubia, 2 names of fossil species that most likely do not belong to Anaphes, 3 unavailable names and 20 species transferred to other genera are listed separately; among the latter, Anagrusfoersteri (Ratzeburg) is transferred to Erythmelus Enock as E. foersteri (Ratzeburg), comb. n. Host records published from 1985–2015 are tabulated; most are from the literature but a few are from unpublished records found on slide mounted Anaphes specimens in various collections, mostly in Europe. The merits of classifying the available names of nominal species into an earlier classification with subgenera Anaphes (Anaphes) and Anaphes (Patasson) instead a later classification consisting of species groups within Anaphes (Anaphes) and Anaphes (Yungaburra) are discussed; the earlier classification is preferred.

The objective is to clean up the colossal taxonomic mess in this group of egg parasitic chalcid wasps (Chalciodoidea: Mymaridae) and provide an illustrated identification key to all described European species (including two introduced from Australia for biological control against a Eucalyptus pest in southern Europe) and to catalogue the 231 world species. As a result of the study a total of 146 names have been placed in synonymy, leaving about 30 valid species for Europe. One North American species was placed in synonymy under a European name. The biology of Anaphes species is discussed and a list compiled of about 65 new host records, mainly from the published literature, since the last list was produced in 1985. The species are mainly parasitic on eggs of weevils and leaf beetles, but a few other insect groups (flies, true bugs) are also parasitized. The 321 world species are comprehensively catalogued. Anaphes is arguably the most important group of Mymaridae used in biological control. The paper provides a much needed review of the species and features used to distinguish and identify the species. This should help ecologists or biological control workers who might be interested in using Anaphes species for biological control against significant weevil or leaf beetle pests. 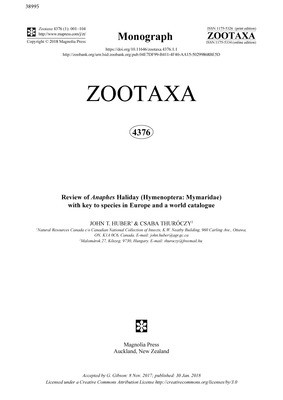